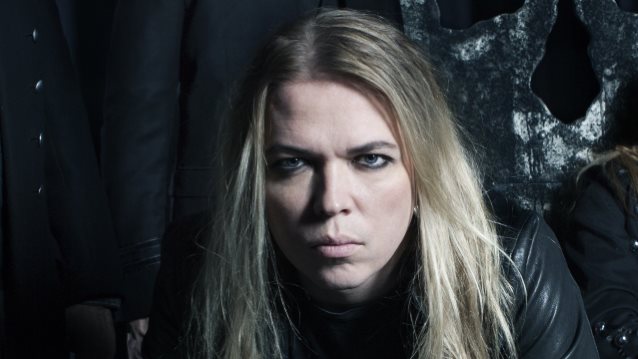 EICCA TOPPINEN: No New APOCALYPTICA Album Until End Of 2018 At The Earliest

Fans of APOCALYPTICA will have to wait until at least the end of 2018 before they hear the follow-up to the band's 2015 album, "Shadowmaker".

The Finnish cello rockers have spent the last few months touring in support of the twentieth-anniversary re-release of the band's epic debut, "Plays Metallica By Four Cellos".

Asked by TotalRock Radio at this month's Sweden Rock Festival what APOCALYPTICA's plans are for the foreseeable future, Eicca Toppinen said (see video below): "We are touring with this ['Plays Metallica By Four Cellos'] concept. We do the festival season in Europe. In September, we do North America, then we do a little bit more Europe, then we do South America. And next year we're gonna do a little bit more North America and South America and Asia and Australia. And at the same time, we're working on the new music for the next, let's say, 'proper' release — proper new release."

Even though APOCALYPTICA is busy writing new material, Toppinen was quick to point out that it will be quite a while before a new album is completed. "It's not gonna be before the end of next year, because we focus on this, touring-wise, this concept," he said. "Originally, I thought, 'Hey, let's make the anniversary thing. Let's play a maximum of thirty shows.' Because, first of all, we didn't know how interesting the concept we [could] create, how it [was] gonna work out. But suddenly it turned out great — the concept is really good, and there seems to be a lot of demand; people want to see it — so we thought, 'Okay. If people want to see it, let's do it.' So now we are gonna play maybe one hundred and fifty shows of this concept."