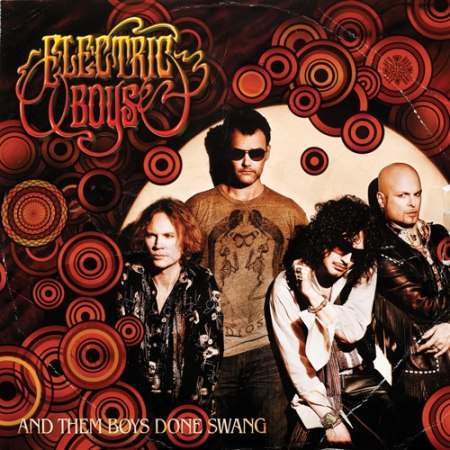 Fan-filmed video footage of ELECTRIC BOYS' March 11, 2011 concert at Lisebergshallen in Gothenburg, Sweden and March 12, 2011 show at Mortens in Uddevalla, Sweden can be viewed below.

The reunited original ELECTRIC BOYS lineup — Franco Santunione (guitar),Andy Christell (bass),Niklas Sigevall (drums) and Conny Bloom (guitar, vocals) — will release its first album since 1992 called "And Them Boys Done Swang" on April 6 via Supernova Records, a division of the Cosmos Music Group. The CD will be made available in Japan on March 16 through JVC with three bonus tracks.

01. Reeferlord
02. My Heart's Not For Sale
03. Father Popcorn's Magic Oysters
04. Angel In An Armoured Suit
05. Ten Thousand Times Goodbye
06. The House Is Rockin'
07. Welcome To The High Times
08. Sometimes U Gotta Go Look For The Car
09. Put Your Arms Around Me
10. The Day The Gypsies Came To Town
11. Rollin' Down The Road
12. A Mother Of A Love Story
13. Chickalicious (Japanese bonus track)
14. Down On Shakin' Street (Japanese bonus track)
15. Nowhere To Go But Up (Japanese bonus track)

ELECTRIC BOYS in 2009 released a 20-track "best-of" collection, titled "Now Dig This!", via Spinefarm Records. It features songs from the band's three studio albums, including "Psychedelic Eyes", "Mary In The Mystery World", "Groovus Maximus", "The Groover", "Rags To Riches", "Captain Of My Soul" plus a 2009 remix of "All Lips N' Hips", along of course with the original version, a longstanding staple of rock clubs around the world.

Formed in 1988, ELECTRIC BOYS achieved recognition around the known rock'n'roll world with signature hit single "All Lips N' Hips" plus a series of albums that tapped into the very essence of long-haired, leather-trousered, late-night cool.

Touring alongside bands such as THUNDER and MR. BIG, and drinking from the same well as rock legends like AEROSMITH, the band offered an alternative to the late '80s hair-metal scene, fusing hard rock and heavy funk to create an instantly recognizable style ("Groovus Maximus") built riff by riff on the sturdiest possible foundations, unswervingly provided by drummer Niklas Sigevall.

Lauded by the media, feted by the industry, respected by the top producers of the day (including Bob Rock) and supported by a genuinely international fanbase, the ELECTRIC BOYS — led into action by flamboyant frontman Conny Bloom, who has continued to play and record both under his own name and with SILVER GINGER 5 and HANOI ROCKS, as well as appearing in TV ads for Jameson Whiskey — consistently showed that the great rock'n'roll dream was available in many colours, and that the sitar did indeed have a serious part to play!