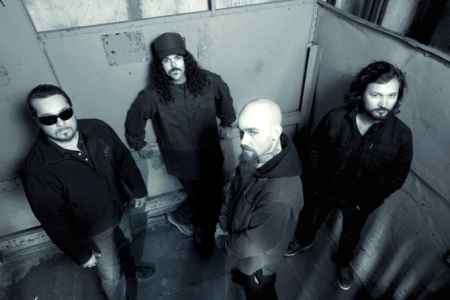 Fan-filmed video footage of KYUSS LIVES!, the project featuring three-quarters of KYUSS — the influential American stoner rock/metal band, originally from Palm Desert, California — performing on Saturday, March 12 at Rockefeller in Oslo, Norway can be viewed below.

Speaking to TheQuietus web site, Garcia said, "We rehearsed a couple of months ago and everything went great, man. Everything went nice and smooth. It sounded so good that me, Brant, Nick and Bruno decided that we are going to do another record, so I'm very, very excited about that."

Regarding why KYUSS guitarist and founding member Josh Homme is not involved in the reunion, Garcia told Rock Sound, "I have nothing bad to say about Josh — he's extremely intelligent, very smart, a great guitar player, great songwriter, a great vocalist — he is a bad-ass, there is no question, and I love him dearly but he is busy with his own thing. He has THEM CROOKED VULTURES, QUEENS OF THE STONE AGE, he's a father, a businessman and even if we asked him to do it, I don't think he'd say yes, so I don't want to set myself up for a big fat no which is 99.9 percent what he would say."

KYUSS, the inventors of Desert Rock, have been in the last ten years much more popular than when they were still around in the early Nineties. So, due to massive public demand over the years to play songs from his old cult band KYUSS, John finally made the decision to give the fans what they want.

The last couple of years John Garcia thought often about reviving his KYUSS legacy on stage. The more he thought about it, the more he really wanted to do this. John commented: "I don't want to do this just for myself, but especially for the fans. Both for the ones that have seen KYUSS live back in the days, and especially for the ones who haven't had that chance. This could be as close as they could get to the real thing."

In October 1995, just three months after releasing what could be argued as their breakthrough album "...And The Circus Leaves Town" (thanks to MTV airplay),KYUSS broke up. Their last recording was a 10" vinyl on the now-defunct label Man's Ruin Records, which was later re-released on a split CD with Homme's QUEENS OF THE STONE AGE. The band has been on an indefinite hiatus ever since and has reached a legendary status, influencing thousands of new young rock bands.