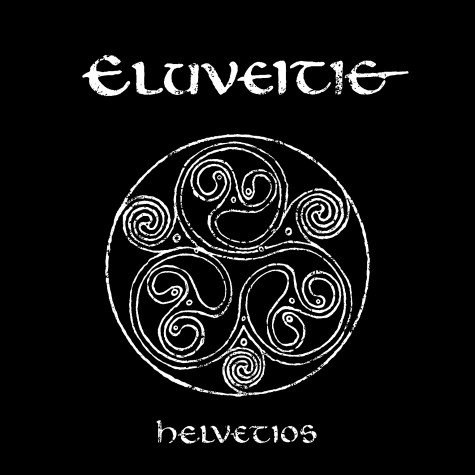 Simeon Koch and Ivo Henzi of Swiss folk metallers ELUVEITIE recently answered a number of fan-submitted questions for Fret 12. You can now watch the chat below.

ELUVEITIE has joined CHILDREN OF BODOM on the Finnish metallers' North American headlining tour in celebration of the band's 15th anniversary. The trek kicked off on January 30 in Rochester, New York and will run through March 4, hitting 26 cities over the course of the five-week jaunt. Boston-based extreme metal band REVOCATION and Canada's THREAT SIGNAL are also on the bill.

ELUVEITIE's new album, "Helvetios", was released in Europe on February 10 via Nuclear Blast Records. The CD was recorded at New Sound Studio in Pfäffikon, a municipality in the canton of Zurich in Switzerland, with producer Tommy Vetterli (a.k.a. Tommy T. Baron; CORONER/ex-KREATOR guitarist). According to the band, Vetterli "record[ed] drums, guitars and vocals and also produc[ed] and mix[ed] the record. Most folk instruments and also vocals [were] recorded by Anna Murphy and Marco Jencarelli at the Soundfarm studios in Lucerne."

Performance (February 7 concert at the Gothic Theatre in Englewood, Colorado):