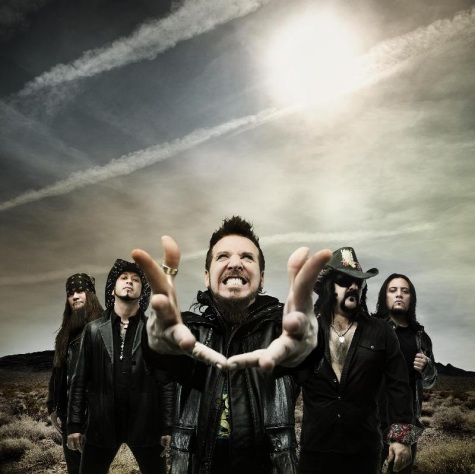 HELLYEAH To Release 'Band Of Brothers' In June

The metal juggernaut known as HELLYEAH — featuring Vinnie Paul Abbott (PANTERA, DAMAGEPLAN),Chad Gray and Greg Tribbett (MUDVAYNE),Tom Maxwell (NOTHINGFACE) and Bob "Zilla" Kakaha (DAMAGEPLAN) — has set "Band Of Brothers" as the title of its third album, to be released in early June via the group's new label home, Eleven Seven Music. The CD was recorded in Dallas, Texas at Vinnie Paul's home studio, VP's Upstairs Studio, and was produced by the band and Jeremy Parker (GODSMACK, EVANESCENCE),who also served as engineer.

Commented Gray, "I'm really excited about what we've done on this new album. I've always separated MUDVAYNE and HELLYEAH as much as I could, even though it was my voice. Melodies, lyrics and just the overall style of writing were different. With 'Band Of Brothers', I just quit being afraid of who I am in relation to this band. I think we've all really gotten back to the original roots of what we've done individually and brought it together on this album. As an artist, as long as you're painting with your own brush, no one can compare or challenge you. I just painted with a bigger, heavier brush than I had with HELLYEAH in the past. I think this is what fans have always expected to hear from us, and now were giving it to them."

Added Jeremy Parker, "It's impossible not to have a good time jamming this record. It has the anger and violence of PANTERA and MUDVAYNE, but a party vibe that can only be HELLYEAH!"

In a recent interview with Loudwire, Vinnie stated about "Band Of Brothers" , "On our first two records, we were a new band. We really wanted to branch out and expand and experiment with all different styles. We all come from traditional metal bands and backgrounds, so it was a great breath of fresh air to play in a band that was rock 'n' roll, blues and Southern rock. We got that out of our system and got really focused on going back to our metal roots. It's heavy, focused, groove-oriented and I'm excited about it."

When asked if the bluesy, Southern rawk element been abandoned altogether or if it's still there somewhat, just in lesser form, Vinnie said, "There is some of that in there, but when we started writing, we thought, 'Let's take this to a place we haven't been all the way yet.' We've been super diverse, from songs like 'Alcohaulin' Ass' to 'Better Man', but this one honks from start to finish! . . . It's about getting your groove on — that's what we used to do. The first two records were the chance to breathe and expand and do something we hadn't done in our past and in our other bands. When you meld guys from PANTERA, MUDVAYNE and NOTHINGFACE, this is what you get. It just honks."

On the topic of how he thinks PANTERA fans truly feel about HELLYEAH, Vinnie said, "Some PANTERA fans are on the fence and I understand that. PANTERA is a marquee band, with the most diehard fans. We sold over 20 million records without MTV or radio. For some people, that's the only band they'll do. But then again, a whole lot of them understand this and have followed HELLYEAH and have been in line with us. HELLYEAH have great fans. We're a beer-drinking, hell-raising band that kicks ass live. I love both the records. It's a good release, to play songs that are not full throttle 24-7. But this new one is a great combo of what we previously did, with more metal."

HELLYEAH's sophomore album, "Stampede", sold 28,000 copies in the United States in its first week of release to debut at position No. 8 on The Billboard 200 chart.

SkullsNBones.com's Sam Roon sat down at Eleven Seven Music's New York City offices with Jason Lekberg to get an exclusive preview of HELLYEAH's third album. A five-minute video clip of the session, which includes audio samples of several of the new HELLYEAH tracks, can be seen below.