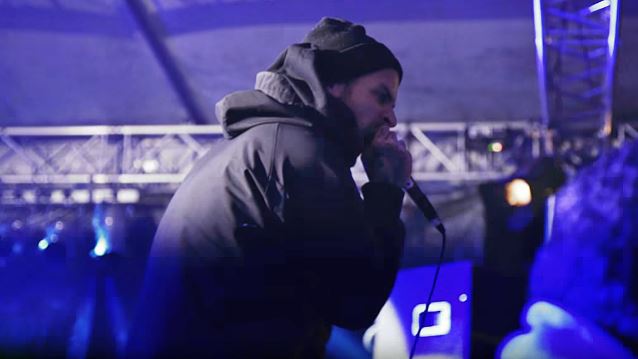 Ulle Media has uploaded professionally filmed video footage of EMMURE's April 24 performance at Exhaus in Trier, Germany as part of the "Impericon Never Say Die! Open Air" tour. Check it out below.

EMMURE pulled out of a series of U.S. shows in October last year "to focus on other things," which was then followed by bassist Mark Davis, lead guitarist Jesse Ketive, rhythm guitarist Mike Mulholland and drummer Adam Pierce leaving the band. Davis later told AltPress.com about his departure from the group: "There is no time or room for negativity in life. If someone is bringing you down or holding you back from your full potential, it's time to cut them out, no matter how much you may love them."

Palmeri released a statement last month in which he said he regretted saying "a lot of stupid shit" in the past. He said: "Over the years, specifically the last decade, I have done a pretty good job at painting myself as an egotistical, psychotic, moronic douche. I did and said a lot of stupid shit, a good portion of which I look back [on] with embarrassment and regret. I have grown so much as person and I like to think there is still chance for people to understand that everyone grows differently and at their own pace. I am still growing, but I am not the person people have made me out to be. I look forward to reconnecting with all the fans who have stuck with EMMURE through the years and just over all excited about the future."