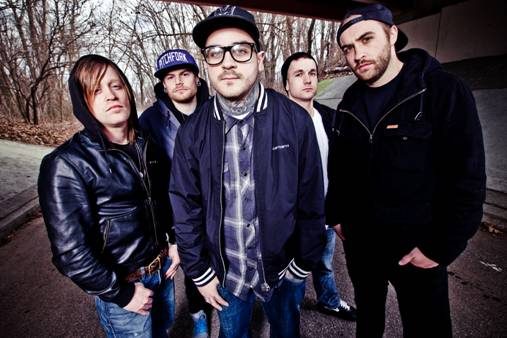 EMMURE To Enter Studio This Fall

EMMURE will close out 2013 by headlining the Never Say Die! tour in Europe (October 4-26) and then a full U.S. tour (October 29 - November 22) alongside ASKING ALEXANDRIA, SEVENDUST, ALL THAT REMAINS and FOR TODAY.

Comments EMMURE guitarist and founding member Jesse Ketive: "We couldn't be happier to announce that following Never Say Die! and the ASKING ALEXANDRIA tour, we will be heading into the studio to work on the new album which is aimed for a spring release!

"We have been working hard in between our rigorous world touring schedule this past year and a half and we can't wait to unveil new material.

"We have re-signed to Victory Records and there will be a lot of new things developing for EMMURE through the end of the year.

"Thank you for your constant support through the years and we promise to deliver one of the best EMMURE records to date. See you on tour."

In an interview with Alternative Press, EMMURE vocalist Frank Palmeri stated about "Slave To The Game", "I think this record is just brutal-sounding. It's got everything I think that people expect from us — and I mean that in the sense that we kind of gave people, or at least for ourselves, more of what we felt the music should be from EMMURE. I'm probably making no sense right now. [laughs] It's just a heavy fucking record. It's another EMMURE record that hopefully people get to enjoy with us, because we dig it and that's what it comes down to. We just make albums we try to enjoy and hopefully people can come along for the ride."

When asked what Joey Sturgis brought to the recording this time around, Palmeri said, "He's got kind of amazing input as far as the music goes and his creative mind. He's a pro at what he does. Honestly, as far as heavy music goes right now — especially with this new age of bands that have come up and become so popular — a lot of their success is owed to Joey Sturgis. He's not only such a talented engineer and producer, but he's just a creative person all around that really brings something extra to the table when something is lacking or even perhaps just a new fresh mind to material that maybe bands themselves weren't aware of. It's always good to have an outside perspective from someone who is just talented. It paid off for us on our last album and I think this one as well."