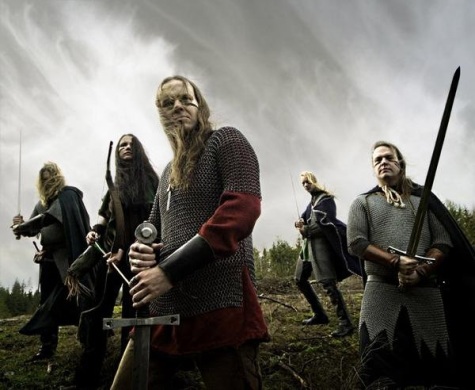 Finnish folk metallers ENSIFERUM recently entered the studio to begin recording their fifth album for a fall release via Spinefarm Records. The band states, "[We] started working at the famous Petrax studio (CHILDREN OF BODOM, NIGHTWISH) [in Hollola, Finland] last week with producer Hiili Hiilesmaa (HIM, SENTENCED) who is also mixing the album. From Petrax studio, the band will move on to two other locations in the Hämeenlinna area.

ENSIFERUM's new album will contain 10 tracks and will include guest appearances by members of DIE APOKALYPTISCHEN REITER and the legendary Finnish singer and actor Vesa-Matti Loiri.

The first in a series of websidodes featuring behind-the-scenes footage from the new CD recording process can be seen below.

ENSIFERUM's fourth album, "From Afar", sold around 900 copies in the United States in its first week of release. The CD landed at position No. 44 on the Top New Artist Albums (Heatseekers) chart, which lists the best-selling albums by new and developing artists, defined as those who have never appeared in the Top 100 of The Billboard 200.

"From Afar" was released on September 9, 2009 via Spinefarm Records. The CD was produced by Tero Kinnunen (NIGHTWISH, AMORPHIS) and Janne Joutsenniemi ('Victory Songs' producer) and was mixed by Hiili Hiilesmaa (HIM, SENTENCED, AMORPHIS).