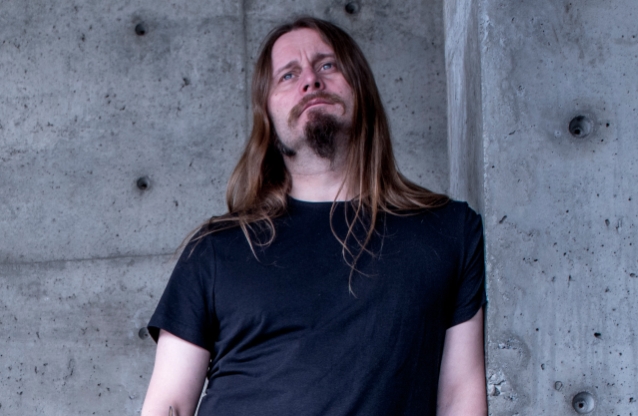 One of the progenitors of Viking metal, ENSLAVED frontman Grutle Kjellson, isn't fond of the popular historical drama "Vikings". The series, which depicts the life and times of Viking Ragnar Lothbrok, stars Australian actor Travis Fimmel as Lothbrok and was recently renewed for a sixth season. Kjellson, a noted Viking history buff, said "everything about that series is fake" and is "just a dumb Hollywood adaptation."

In an interview with Diamond Oz of Metal Underground prior to ENSLAVED's October 14 concert at SWX in Bristol, United Kingdom, , Kjellson was first asked how he would compare ENSLAVED's latest studio album, "E", to its 2015 predecessor, "In Times". "We got a new member on 'E'," he said. "Of course, a new member brings a change in the band dynamics, obviously. So, there's more energy on 'E'. There's, how shall I put it? To me, it sounds a lot more vital and with the addition of Håkon [Vinje] on keys, we kind of, for the first time in our history, we kind of took advantage of having a keyboardist. He's really, really skilled. He comes from the prog rock, jazz rock scene, so he really colored the recordings with his amazing hands. That's one of the biggest differences. Of course, we spent a lot more time on details this time. We worked more closely together. It's more of a band effort than 'In Times' was."

Kjellson was then asked what he thinks of modern depictions of Viking culture, in particular "Vikings". "Terrible. Absolutely awful," he said. "I mean, the 'Vikings' is kind of destroying that era for me. I wouldn't mind if they — it's a fairytale. It's not based upon historical facts or artifacts at all. It's all based on archaeology and history. Everything with that series is fake. They didn't look like that, they didn't live like that, they didn't act like that and they for sure didn't speak like that. It's just a dumb Hollywood adaptation. It's not even an adaptation. It's a fairytale they called 'Vikings'. They might as well call it 'Conan And His Friends On New Adventures'. That's my opinion. [Laughs]"

With "E" now over a year and ENSLAVED often prone to releasing an album every other year, Kjellson asked whether the band had started composing new material. "Oh yeah," he said. "Of course. We have been very active since the release of 'E', playing a lot of shows and being on several tours. That activity will calm down a little bit next year. We have time to focus on writing and arranging new material. Something will definitely happen next year."

"E" was released in October 2017 via Nuclear Blast. The disc was recorded at Duper & Solslottet Studios in Bergen and was once again mixed and mastered by Jens Bogren at Fascination Street Studios in Örebro, Sweden.