ENSLAVED Guitarist Featured In 'The Heart Is A Drum Machine' Documentary

"The Heart Is A Drum Machine", the eagerly awaited documentary film that explores the complex and critical relationship between humanity and music, will premiere in Los Angeles on Saturday, April 25 at Nike's Ricardo Montalbán Theater in the heart of Hollywood. Sponsored by L.A. Weekly and Nike, proceeds will benefit the Charles Mingus Youth Arts Center in Watts, a facility of the City of Los Angeles Department of Cultural Affairs.

Directed by Christopher Pomerenke and produced by Ryan Page, Joe Mundo, and Hans Fjellestad, "The Heart Is A Drum Machine" explores music's role in shaping human history, the profound connection people have had to music throughout human history, how it has shaped our experiences, and its involvement in our daily lives. Tackling the topic is a who's who of musicians, including George Clinton, TOOL's Maynard James Keenan, RED HOT CHILI PEPPERS' John Frusciante, and JIMMY EAT WORLDS's Jim Adkins. Music historians and writers such as MTV's Kurt Loder and KCRW's Nic Harcourt were also interviewed, in addition to Carl Sagan's widow and collaborator Ann Druyan, who discusses the Voyager Golden Record. THE FLAMING LIPS' Steven Drozd created an original score for the film and covered ELTON JOHN's "Rocket Man" with vocals by Maynard James Keenan.

ENSLAVED's Ivar Bjørnson speaks about lucid dreams and music. He details how he became involved with the film: "ENSLAVED went over to do three shows during South by Southwest 2008, in Austin, Texas. On the press schedule was 'My Heart is a Drum Machine', a constellation of words that caught my immediate interest. It turned out to be the shooting for a documentary on the complex relationship between music, humanity and psychology. I went to a villa outside Austin, sat down in a dark room, and started talking about these acutely huge issues: What is the essence of music? What does music mean to me? What can music do? It turned out to be an extraordinary session that seemed to be highly enjoyable for both me and the movie makers. Now, a year after, the movie has premiered in the United States, and hopefully it will make its way across the world. I haven't seen the whole thing yet, but the theme and the makers' approach to it is truly interesting. I remember being brought back to the hotel and they told me the next guy to do a shoot was Elijah Wood, and thinking I was in good company. When I saw the final list, including TOOL's Maynard James Keenan, George Clinton, Juliette Lewis and more, I realized the company was a lot more than merely 'good!'"

To view the trailer for "The Heart Is A Drum Machine", click here. 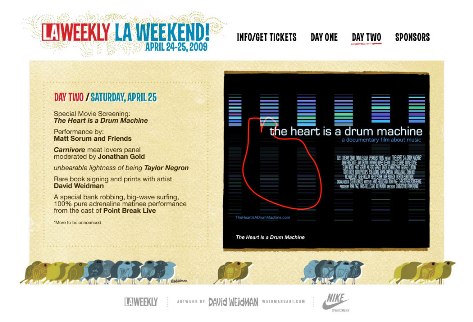