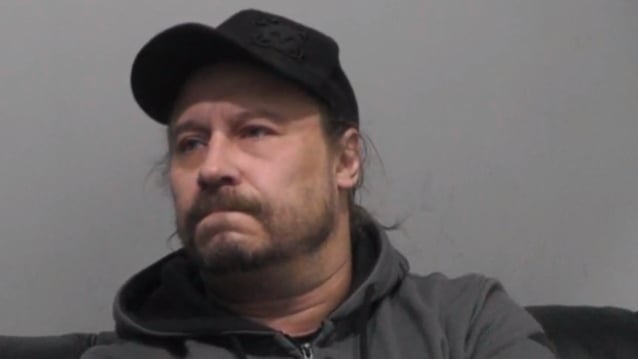 Former ENTOMBED and current ENTOMBED A.D. singer Lars-Göran Petrov has opened up about his cancer diagnosis.

The Swedish musician is apparently battling cancer of the bile duct (also called cholangiocarcinoma),which is extremely rare. In most patients, the tumor cannot be completely removed by surgery and is incurable. Palliative measures such as resection, radiation therapy or stenting procedures may maintain adequate biliary drainage and allow for improved quality of life.

Asked by Metal Hammer how he found out about his cancer, Petrov said: "A couple of months ago. I felt a lump in my solar plexus. And I was, like, 'Okay, I'll ignore it.' But then it started to hurt, so I went to the doctor, and they X-rayed it quickly and said, 'You have to go to the specialist.' That was weird. You can't imagine what it feels like. Your whole body goes warm. It's, like, 'Fucking hell.'"

Although Petrov revealed his cancer is "incurable," he said that the doctors are "hoping" they will be able to treat it. "I will find out when I meet my doctor, who is the best doctor when it comes to this particular cancer," he explained. "Being young, the doctor said there's hopefully a way to control it so it doesn't spread, or maybe even make it smaller."

Sad news.. LG Petrov has been struck by cancer and he is undergoing chemo treatment to try and control it. Our thoughts...