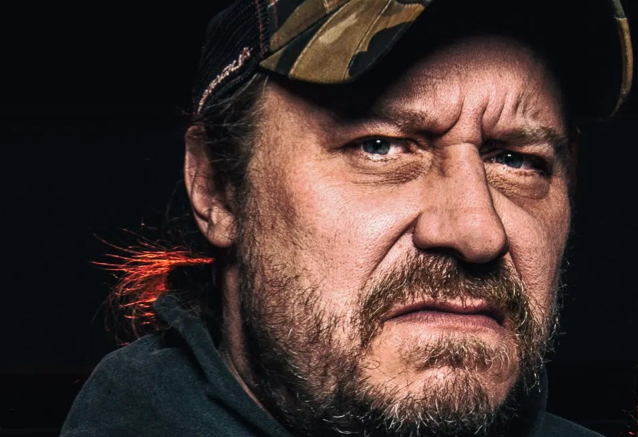 Lars-Göran "LG" Petrov's former bandmates have unveiled the headstone for his grave, more than five months after the pioneering ENTOMBED and ENTOMBED A.D. singer died after a battle with bile duct cancer. He was 49 years old.

Earlier this week, the surviving members of FIRESPAWN and Petrov's former bandmate in ENTOMBED, guitarist Ulf "Uffe" Cederlund, both shared photos of the spot where L.G.'s body was buried in a cemetery outside Stockholm, Sweden. You can see the images below.

In an interview with Revolution-Music.dk, Petrov defended his group's decision to release albums and tour under the name ENTOMBED A.D.. "It had to be done, because without an album you can't tour," he explained. "I mean, you can tour, but if there's seven years between albums, it's ridiculously long. So we did the right thing, and we did what bands should do, and still do — release an album and go on tour and headbang and have a good time with friends, and that's what it's all about."

Asked if he thought the ENTOMBED name has been damaged as a result of the drama surrounding the split with Hellid and the decision to continue as ENTOMBED A.D., Petrov said: "Nah, not really. A thousand people have a thousand different opinions — good and bad. But we do what we felt was right. And we're out here touring, and that's the most important [thing], I think. And leave the childishness aside and play metal, basically."

LGs stone is finally in place. It’s an absolutely beautiful stone, it couldn’t be any more perfect. Big thanks to Mogge...