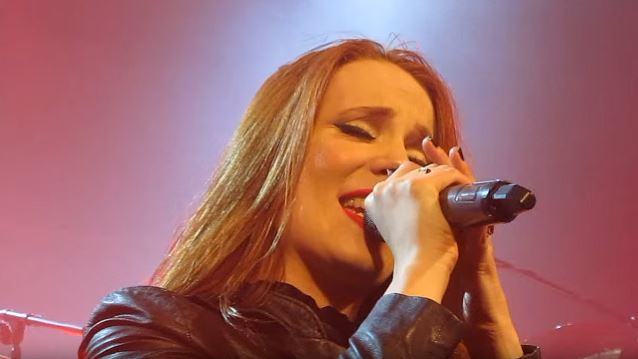 Bassist Rob van der Loo of Dutch symphonic metallers EPICA spoke to Louder Noise about the progress of the recording sessions for the band's follow-up to 2014's "The Quantum Enigma" album. He said (see video below): "So far, I must say — of course, I can't spoil too much the new album — but we kind of… One of the biggest changes, of course, is not just me being the new member of the band, but also we changed… [On 'The Quantum Enigma'] we started working with Joost van den Broek, who used to be the old keyboard player from AFTER FOREVER, the band where Mark [Jansen, guitar/vocals] used to play as well. And we recorded it in a completely new studio, a completely new setting. I guess this is also the first album that we worked with a complete orchestra, 'cause normally we use a lot of software. We always add some real strings, of course. I mean, it still has to sound organic, of course. But I can already spoil that with this new album, we're actually gonna record it with a bigger orchestra — even bigger than the last one — with a bigger choir. We're also gonna have a brass section on it as well. And we just came out of the studio. We already recorded the drums. I just finished bass last week. Isaac [Delahaye] did the rhythm guitars already. And we also did it with a new sound setting as well. We actually kind of stripped our sound to make it sound a little bit more aggressive than the last album, to be honest."

Mark Jansen recently told Metal Wani about EPICA's next album: "We are in a luxurious position that we have way too many songs, so we can really select the top quality of the songs. And that will be a hard choice, because everybody will have, of course, slightly different opinions and preferences. But I'm pretty sure we're gonna manage, because there's already some tracks that really stand out and they are better than the others, and they, for sure, are gonna be the framework of the album. Now we have to see which other tracks fit best to the best tracks. 'Cause sometimes there's a track [that is] really good, but not fitting on an album. Now we have the luxurious position to leave them out and put a track that really fits the flow of the album. So we can really [make] a very balanced album. Like a good football team, there's always two options for every position. We have that now for every song — two options."

Regarding the musical direction of the new EPICA material, Jansen said: "I think we experimented quite a bit with 'The Quantum Enigma', 'cause some fans… Ninety percent of the fans said, 'Great! Now you sound how I always wanted you to sound.' Some fans said, 'Ooh, it's a bit heavier.' But I think this is the line we want to keep. So the next album will be in the line of 'The Quantum Enigma'. We will put a little bit different emphasis here and there, but that will be the line. And song-wise, we try to make it an even better one than 'The Quantum Enigma', even though that got very good reviews. We always have the desire to create something better than we've done before. And as long as you feel such a desire, I think then the flame is burning."

EPICA's next album is tentatively due in September.

EPICA has just returned to North America for its rescheduled "Enigma" tour. Support on the trek is coming from MOONSPELL and STARKILL.

EPICA's fall 2015 run was supposed to mark the band's long-awaited return to North America after their tour with MACHINE HEAD in late 2014 got canceled. It was also to be the band's first North American trek in support of "The Quantum Enigma", which hit the charts all over Europe and beyond.