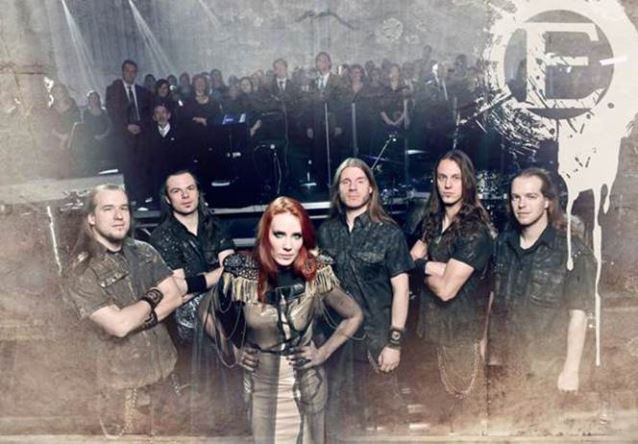 Dutch symphonic metallers EPICA will return to the stage on April 30, 2014 for an album-release show at 013 in Tilburg, The Netherlands.

After taking a break from the road due the pregnancy of lead singer Simone Simons, the release of a new concert DVD, "Retrospect", as well as the writing and recording of the band's upcoming CD, the sextet will put on a memorable show, with plans to perform both old and new songs.

EPICA is currently finishing up the pre-production of the follow-up to "Requiem For The Indifferent", with plans to enter the studio in October with producer Joost Van Den Broek (the former AFTER FOREVER and AYREON keyboard player who has previously worked with REVAMP and STREAM OF PASSION).

To make the album-release show even more special, EPICA's fans will not only be able to purchase regular tickets, but there will be two exclusive bundles available for this event. The first bundle contains a signed version of the upcoming album and the second, larger bundle will consist of a goodie bag, containing a signed copy of the upcoming album, an exclusive T-shirt, flag, lanyard, VIP laminate and a limited-edition poster.

Tickets and bundle for this show will go on sale Saturday, September 14, 2013 at 10:00 CET through Ticketmaster.nl.

There will be special "early-bird" tickets available at reduced price. This offer is valid until September 28, 2013.

EPICA celebrated its 10th anniversary with a one-night-only event, dubbed "Retrospect", on March 23 in Eindhoven, The Netherlands. The band was accompanied by the seventy-piece Reményi Ede Chamber Orchestra and the Miskolc National Theatre Choir, playing an unforgettable three-hour best-of set.