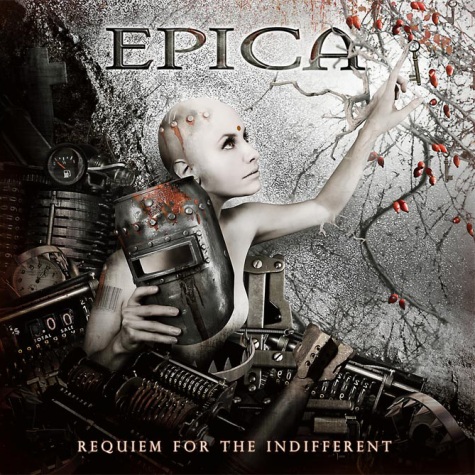 Radio Metal recently conducted an interview with singer Simone Simons of Dutch symphonic metallers EPICA. A couple of excerpts from the chat follow below.

Radio Metal: Nowadays, financial crisis is so frightening that even musicians talk about it in their music. Do you think it's one of the most important crisis we have faced?

Simone: As a musician, you feel it, because a lot of people don't buy records anymore, they just download them. The government is also investing less money in cultural events. So we do feel it. In certain countries, we have to think about how much to charge for a ticket. Yesterday, I talked to somebody from Greece, and he asked me if we were going to lower the price of our tickets, because people can't pay for them anymore. It's a sad thing to think that money is so important and can destroy so much. Hopefully it won't, but it could mean the end of the European Union. Countries like Germany, for example, are investing a lot of money in Greece to get them back on track, but it's a complicated mess!

Radio Metal: What do you think about the news regarding the end of [file-sharing web site] Megaupload?

Simone: I think it's a good thing. But I'm on Twitter, and I read some retweets. Somebody wrote that a child molester will get seven years in jail, and somebody who uploaded music or movies will have to go to jail for fifteen years. It shouldn't be the case. I know that the uploading and downloading thing is a huge world, which is affecting a lot of people. But it's still not ethically wrong as molesting a child, for example. That has an impact on a smaller number of people, of course, but it's something you'll live with for the rest of your life. Piracy is only about economics. It's about missing out on money because people are downloading stuff, but it's not as serious as molesting a child. That should be punished by a hundred years in jail. Piracy should be punished in a different way.

Radio Metal: A lot of people, including musicians, say that this web site was a good thing, because if people could download music for free, the artists would see more people at their shows. In a way, it helped the band to gain notoriety in the world.

Simone: In certain countries, a lot of people just can't afford to buy the record, but they do come to the shows. In Mexico, for example, there's a huge illegal market. When I was walking through the city, I saw a copy of an EPICA album right between the biggest pop singers in the world. I thought it was funny, I even took a photo of it. You can try and fight against it, but in those countries, the illegal market is huge. But then, the people come to the shows. You can tour there and have amazing shows. In the end, it's not like people won't come to the shows because they have the record at home! Those people like to go to concerts and those concerts are always pretty amazing.

Radio Metal: So in a way, it can be a good thing?

Simone: In these countries, it's not a bad thing. But economically successful countries in Europe — not all of them, but the majority — should not download. I don't want to say downloading is ever a good thing. It's just a problem we try to fight. I have to admit I've downloaded a couple of songs myself, to see if I liked the music, but then I bought the record. Nowadays, everybody's got an iPhone or an iPod, and you can just download the music online for a lower price. Everyone wants to have the music on their mp3 players anyway, but the collectors want to have the real deal, the CD and the booklet and stuff. I download a lot of music on iTunes. You pay something like seven euros less, which I think it's cool. And it's legal.

Radio Metal: The other side of the coin regarding the closing of Megaupload is that people are complaining about the attempt against their freedom. Do you think that people are like children? They're given too much and now they're used to listening to music for free, without paying the artist?

Simone: I think because everybody's on the Internet, and the music is also on the Internet, it doesn't feel like you're actually stealing. People don't see it the same way as going to a store, putting a CD up their sleeve and leaving the shop. But it is basically the same. Hopefully people will buy the record and come to the shows. I hope people will finally see it as stealing. Even some family members or friends of mine, they're downloading, and I tell them it's wrong. They say, "Yeah, but it's on the Internet, it doesn't have a price tag on it." Not everybody understands, and teenagers are really stubborn anyway! They do whatever they want and are very selfish. It's not only about how teenagers act, it's about how parents deal with it as well. For me, as a musician, it's very important for people to know that downloading is illegal and it's affecting the musicians in the end. Everybody thinks, "It's just me," but it's not. The whole downloading issue is like a plague.