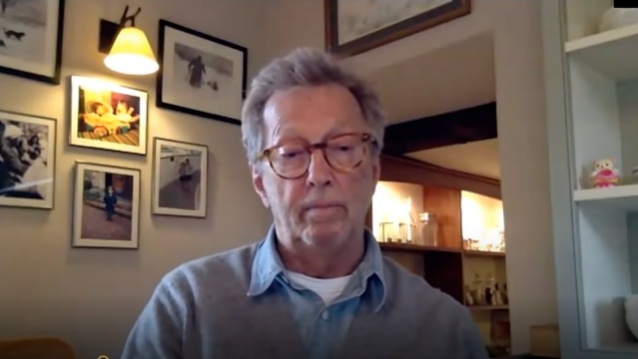 Eric Clapton has opened up about his decision to drop a politically charged song called "This Has Gotta Stop" as a way of addressing his stance against COVID-19 policies. The track, which was produced by his longtime producing partner Simon Climie, came several months after he released the anti-lockdown song "Stand And Deliver" with Van Morrison.

The 76-year-old legendary musician — who previously said he refuses to play live shows that require attendees to prove they've been vaccinated — spoke about the backlash he has faced as a result of his public opposition to lockdown restrictions and vaccinations during a new interview with Dave Spuria of The Real Music Observer.

The iconic guitarist, who previously said he feared he would "never play again" following health issues after both doses of the AstraZeneca vaccine, stated about his current health situation (as transcribed by BLABBERMOUTH.NET): "I'm feeling pretty good. I think it's been about nine months since I got sick from the thing," apparently referring the getting vaccinated, "and for a couple of months I wasn't sure if it was gonna go away, if it's gonna get worse. I couldn't play — I really couldn't play — and I wasn't sure… I had a lot of work to do, whether I was gonna get fit for that or whether it was gonna have to be canceled. Two years of work [had] already [been] canceled. And I came to the States. And that was like a trial; that was in September of last year. And I was really pushing to see if I had recovered enough to be able to stand alongside the guys I play with and hold up my hand. And I had a great time. I still have some stuff going on, which is affected by the cold or the weather or stress to, sometimes. But on the whole, I think I'm pretty much the way I was — thank God — before I walked into that."

Regarding how "Stand And Deliver" and "This Has Gotta Stop" came about, Clapton said: "My career had almost gone anyway. At the point where I spoke up, it had been almost 18 months since I had kind of been forcibly retired. And I joined forces with Van. I got the tip that Van was standing up to the measures. And I thought, 'Why isn't anybody else doing this?' And we go back; I've known him since we were kids. And I contacted him. I said, 'What do you think? What's going on?' And he said, 'I'm just objecting, really. But it seems like we're not even allowed to do that. And nobody else is doing it.' And I said, 'You're kidding. Nobody else?' And he said, 'Nobody else.' And I said, 'I'm with you. Is there anything I can do to help? Have you got any songs?' And of course, it was a silly, stupid question 'cause he writes two songs a day or something like that. And he sent me 'Stand And Deliver', which he had already… I didn't know he had already recorded it. So I thought, 'Oh, man. I'm getting an unreleased Van Morrison song.' I was over the moon anyway. And it was during the process of talking about that to another musician, and then getting me excited, and then sharing that news, and I found that nobody wanted to hear that. And I was kind of mystified because I seemed to be the only person that thought that was an exciting or even appropriate idea with what was going on. And that challenged me even more. 'Cause I'm a bit like him maybe — I'm cut from the cloth where if you tell me I can't do something, I really wanna know why I can't do it. And it seemed like I'd had a wall built around me. But I thought, 'I'm gonna do this.' But I did make concessions — I did take out lines or change lines a little bit just to pacify those that I really didn't wanna hurt, people I didn't wanna hurt or scare. And needless to say, my family and friends, they got scared, and I think they were scared on my behalf."

Eric continued: "[I thought], 'What's going on here?' I didn't get the memo. Whatever the memo was, it hadn't reached me. Then I started to realize there was really a memo, and a guy, [clinical psychology professor] Mattias Desmet, talked about it. And it's great — the theory of mass formation hypnosis," he said, referring to the idea that promoting messages encouraging people to get vaccinated against COVID-19, among other scientifically validated pandemic communications, is an attempt to hypnotize groups of people to follow these messages against their will. "And I could see it then — once I kind of started to look for it, I saw it everywhere. And then I remembered seeing little things on YouTube which were like subliminal advertising; it had been going on for a long time — that thing about 'you will own nothing and you will be happy.' And I thought, 'What's that mean?' And bit by bit, I put a rough kind of jiggle puzzle together. And that made me even more resolute. And so I went from that to looking at the news stuff that was coming out in England. In the U.K., we have BBC, and it used to be an impartial commentary on world affairs and state affairs. And suddenly it was completely one-way traffic about following orders and obedience. And I felt really motivated, musically. It instigated something which really was laying dormant. I was just playing live gigs up until the lockdown without really being socially involved in any way. … I have a tool, I have a calling, and I can make use of that. So I set about it and started writing."

Clapton made his proclamation against vaccine mandates in July 2021, shortly after Prime Minister Boris Johnson announced that vaccine passes would be required to enter nightclubs and venues in the U.K.

"Following the PM's announcement on Monday the 19th of July 2021 I feel honor-bound to make an announcement of my own, I wish to say that I will not perform on any stage where there is a discriminated audience present," he said in a statement. "Unless there is provision made for all people to attend, I reserve the right to cancel the show."

Last November, Clapton admitted that he had lost friends and music associates due to his anti-vaccine stance. He said at the time: "My family and friends think I am a crackpot anyway.

"Over the last year, there's been a lot of disappearing — a lot of dust around, with people moving away quite quickly," he continued. "It has, for me, refined the kind of friendship I have. And it's dwindled down to the people that I obviously really need and love. Inside my family, that became quite pivotal ... I've got teenage girls, and an older girl who's in her 30s — and they've all had to kind of give me leeway because I haven't been able to convince any of them."

He added: "I would try to reach out to fellow musicians and sometimes I just don't hear from them. My phone doesn't ring very often. I don't get that many texts and emails anymore."