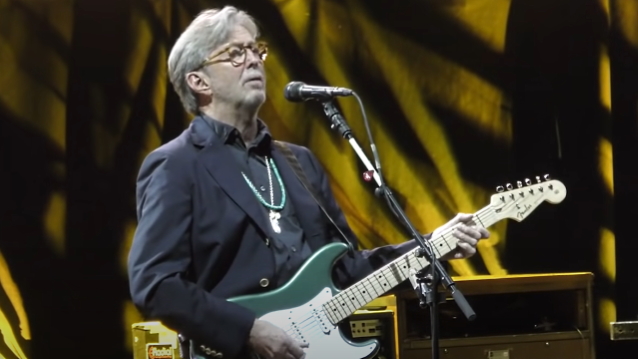 Eric Clapton has postponed two concerts on his European tour after testing positive for COVID-19, the disease caused by the SARS-CoV-2 coronavirus.

The shows originally scheduled for Tuesday, May 17 in Zurich, Switzerland and Wednesday, May 18 in Milan, Italy are now expected to take place later in the year.

According to a post on Clapton's Where's Eric web site, the legendary 77-year-old rocker contracted COVID-19 after "shortly after" his May 8 concert at London's Royal Albert Hall.

"[Eric] has been told by his medical advisors that if he were to resume travelling and performing too soon, it could substantially delay his full recovery," the post adds. "Eric is also anxious to avoid passing on any infection to any of his band, crew, promoters, their staff and of course, the fans."

Clapton is now hoping to resume the tour in Bologna, Italy on May 20. He has dates booked through June 17 in Tampere, Finland.

Clapton is scheduled to embark on a seven-date U.S. tour this summer. The trek will kick off on September 8 in Columbus, Ohio and run through September 19 at Madison Square Garden in New York City.

Eric has been vocal about his stance against COVID-19 policies and has in the past refused to play live shows that require attendees to prove they've been vaccinated.

Clapton criticized the lockdowns instituted around the world in the wake of the coronavirus pandemic and stoked fear and conspiracy theories after receiving a COVID-19 vaccine. Clapton recounted his negative experience with the AstraZeneca shot, suggesting the side effects had been so "severe" that he was afraid that he would "never play again." He also said he was inspired by another musician-turned-anti-vaccine activist, Van Morrison.

Clapton first made his proclamation against vaccine mandates in July 2021, shortly after Prime Minister Boris Johnson announced that vaccine passes would be required to enter nightclubs and venues in the U.K.

Last November, Clapton admitted that he had lost friends and music associates due to his anti-vaccine stance. He said at the time: "My family and friends think I am a crackpot anyway.

"Over the last year, there's been a lot of disappearing — a lot of dust around, with people moving away quite quickly," he continued. "It has, for me, refined the kind of friendship I have. And it's dwindled down to the people that I obviously really need and love. Inside my family, that became quite pivotal ... I've got teenage girls, and an older girl who's in her 30s — and they've all had to kind of give me leeway because I haven't been able to convince any of them."

He added: "I would try to reach out to fellow musicians and sometimes I just don't hear from them. My phone doesn't ring very often. I don't get that many texts and emails anymore."