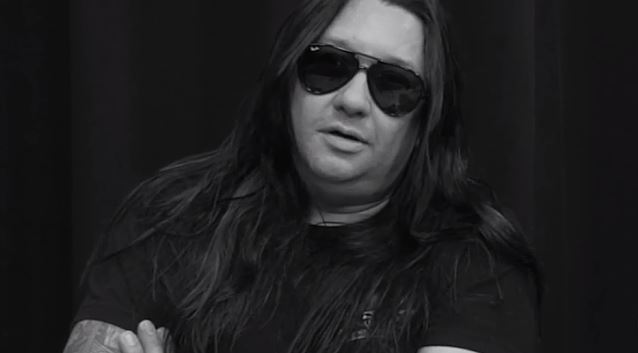 Spotlight Report recently conducted an interview with guitarist Eric Peterson of San Francisco Bay Area metallers TESTAMENT. A couple of excerpts from the chat follow below.

Spotlight Report: Tell us about the new DVD, "Dark Roots Of Thrash". What are the main differences between this DVD and 2005's "Live In London"?

Eric: In 2005, the band got back together with the original lineup. We ended up doing a reunion tour and filmed that, which became the "Live In London" DVD. The setlist was a lot of old stuff that we did with the original lineup. The reunion thing is gone and this is now a full-on band. Now we are TESTAMENT, and we are on our second wave of playing melodic brutal music. I think right now we are at the peak of our career, and it's a peak that will last for a while. We are on fire right now. Especially for our age; we're not twenty- or thirty-year-olds anymore, but we're playing heavier than we have ever played. It's a good time to see TESTAMENT live right now, we're on top of our game. Now that we're older, the metal seems to be flowing out of us better. A couple of different things are different now; I'm playing a lot more solos and Gene Hoglan is the drummer in the band. He has been with us throughout the whole campaign. Gene is on this new release and it looks like he will be on the next TESTAMENT record as well.

Spotlight Report: In the early Nineties, around the time when you were doing the "Clash Of The Titans" tour with SLAYER and MEGADETH, it really looked like you were going to close the gap with the "Big Four" (METALLICA, SLAYER, ANTHRAX and MEGADETH),and it would become the "Big Five" — but it didn't happen. What got in the way? Did something happen with Atlantic Records dropping the ball on promotion? Was there something else we don't know about? Or was it just bad luck?

Eric: It was kind of everything. It was our manager; I don't think he was guiding us in the right direction. He didn't understand the music and didn't know what to do with us. Then there was the label, where the artist representatives were mainly lawyer type of people who didn't understand the music. And then there was a whole new genre north of us about to plague the world with its grunge that came and just saturated the market and metal was now obsolete. Not for long, but it definitely wiped out a lot of the bands that played metal; they either broke up or they cut their hair and put on some flannel shirts and became a grunge band. We then got our last chance with Atlantic to do stuff a bit different. Their music director came to us and said, "We want you guys to give us an alternative record." According to the world alternative, that would mean something totally different; so I came up with "Dog Faced Gods", which is more leaning towards death metal, and I went, "Here you go, this is our alternative!" But what they wanted was the name alternative. They wanted a mainstream song for the alternative movement. "Dog Faced Gods" gave us a whole different perspective of what TESTAMENT was all about; we were now entering the realm of Swedish black metal, we were flirting with that vibe and mixing it with our stuff. It took on a whole new vibe. By the time we got to "The Gathering", we reinvented ourselves. "The Gathering" was like our first record, "The Formation Of Damnation" was our second record, and "Dark Roots Of Earth" is our third record. This is the second wave of TESTAMENT. It's a lot of fun. Everything feels fresh, there are a lot of good ideas going on, and we're older but still younger.

Spotlight Report: We know Alex Skolnick [guitar] left the band in 1993 because of musical differences, but now that you guys are back in full force, wouldn't you reckon you and him are the yin to each other's yang? Would you agree his melodic style and your preference for dark and heavy make a creative synergy?

Eric: Alex isn't so much a total metalhead like me and Chuck [Billy, vocals]. He is more of a music theory guy that comes up with questions like, "What if that riff was in a different key?" or "What if that was major instead of minor?" Those things can matter, so that's kinda cool. But the music starts with me. Chuck pointed that out a lot lately. He said, "Until Eric writes a riff, I can't do anything. He lays the foundation for us to build upon." We all got our own different styles in TESTAMENT, and when you are in a band like this, a lot of compromise is in order. When you're really gung-ho on something, it's probably best to do a side project. I get a lot of my symphonic, evil, darker, cinematic "Lord Of The Rings" type of music out on my other project DRAGONLORD. I am actually working on a record now and I'm halfway done with it. I recruited a new drummer, he's twenty years old and his name is Alex Bent. He's been working with DECREPIT BIRTH and he's a really really good superfast drummer, who also plays in a church band where he plays COMMODORES and EARTH, WIND & FIRE stuff with his dad. He plays R&B and funk, and then by heart he plays grindcore. He loves CRADLE OF FILTH and Nick Barker, and his favorite drummer is Pete Sandoval [MORBID ANGEL, TERRORIZER]. Lyle (Livingston, keyboard player in DRAGONLORD),myself and our new drummer put together a really awesome record. We are now signed to Universal, and the label definitely wants us to do a tour. I'll probably be mixing the album in December and it should come out next year, before the new TESTAMENT record. So we'll have a really metal year next year! I also started writing new TESTAMENT stuff already, and it's definitely influenced by what I was listening to when I was a kid; a lot of live records like JUDAS PRIEST's "Unleashed In The East", AC/DC's "If You Want Blood You've Got It" and "Tokyo Tapes" by the SCORPIONS. It is a lot of fun rock and roll stuff, but we mix in the darkness that what we're about. There are a lot of riffs of which I'd like to borrow the essence and make it TESTAMENT, like METALLICA did with DIAMOND HEAD's "Am I Evil?"