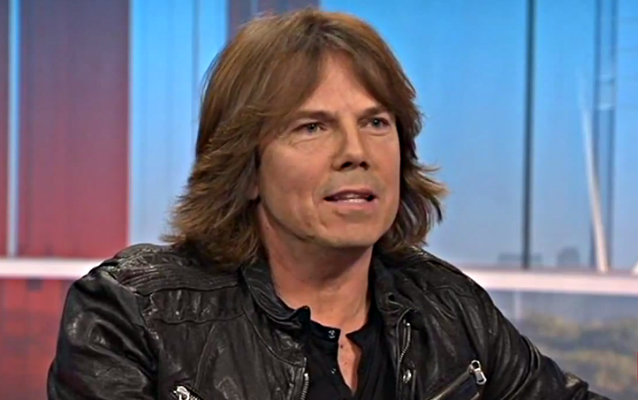 Matt Phelps of Über Rock recently conducted an interview with vocalist Joey Tempest of Swedish hard rockers EUROPE. A couple of excerpts from the chat follow below.

Über Rock: How does the feeling onstage playing the newer stuff compare to the feeling you get when you blast out those really early songs like "Paradize Bay" and "Seven Doors Hotel"?

Joey: There's an emotional side attached to playing stuff like "Paradize Bay", "In The Future To Come", "Prisoners In Paradise" and all this stuff. You look around and see your mates thirty years on from when we recorded them and it's amazing, so there's that element towards those songs. But at the same time there's a special element to the new songs, we really enjoy playing them. "Last Look At Eden", for instance, that's our favorite song to play right now, so it has a new value to it. The old ones have more of a nostalgic, emotional value but it is more fun to play new songs. On these occasions though when you do a sort of career-spanning DVD, it's amazing to play the old stuff because it's part of the catalogue and those are our favourite old songs as well.

Über Rock: Looking back at the two distinct eras of EUROPE, your original run from '83 to '92 and then when you came back with "Start From The Dark" in 2004 to today, which would you say has been the most enjoyable personally?

Joey: It's really difficult, because the first period was where we first got to tour in the U.K. and the U.S.; that was our dream when we started. We were just a little band from Stockholm, so there was a really big fulfilment there. Also to get a record deal with CBS in New York and to become one of the biggest rock bands on the planet for a while. But everybody wanted a piece of you, and we had to go on promotion tours for three months without playing live and stuff. It really wears on bands, and it was a lot of hard work in that sense. Playing wasn't hard, but doing all these playback shows and TV shows and not playing live that was hard, that was the other side to it. But we did feel fulfilled in the first period because we set out with the dream we had to become a touring band like THIN LIZZY and tour in England and tour America and we got our dream. But what is so satisfying with this new period is that we're doing it on our terms. We own our music and we license it out. We choose who we want to work with, management and agents. We plan our tours more. We're in control; that's a very satisfying feeling. Also we've been lucky this second time because we've gained some respect again and done some decent rock albums. The feeling is amazing to do it the second time around and it's even more gratifying to be able to do it on your own terms completely. It's a really good feeling.

Über Rock: Has there been talk of maybe a new album? Album number ten!

Joey: Yeah, album number ten. We're talking about it all the time now and we want to record next year. Whether we manage to get it out next year, we'll have to wait and see. But we are definitely writing and recording it next year and it's a big moment for us. Ten albums might not be a lot for some bands, but for us it's a milestone; it's very important and we're really looking forward to it. Having done "Live At Sweden Rock", and having done these four comeback albums, it's amazing to do a fifth studio album. That will mean we'll have done as many studio albums now, the second time around, as the first time around.