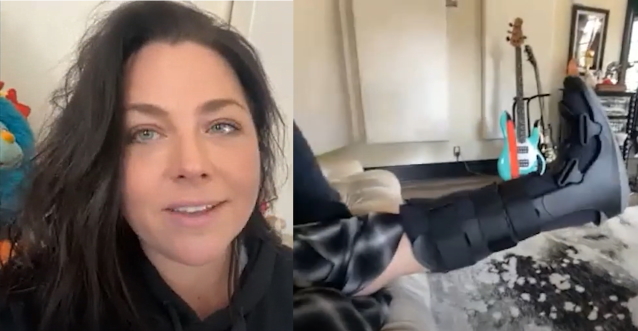 EVANESCENCE's AMY LEE Is Doing 'Okay' After Spraining Ankle While Hiking: 'It's Healed A Lot Already'

EVANESCENCE's Amy Lee says that she is doing "okay," days after she sprained her ankle while hiking near her home in Nashville.

Earlier this week, the 39-year-old singer revelaed in an interview with the 102.9 The Buzz radio station that she hurt herself "really bad" last week while preparing for her band's upcoming U.S. tour with HALESTORM. She said (as transcribed by BLABBERMOUTH.NET): "I have to always go through some kind of training before we go back on tour to get my body strong. And I found all these beautiful hiking trails in one of the state parks near here. So I've been hiking around Percy Warner [Park] on all these trails. And I run down all the different little paths — not the main drag — and it's super fun, 'cause I don't know how long it's gonna be or when it's gonna end, so I can't quit. And I'm listening to the setlist and getting excited and going fast. And I tripped or took a bad step in the middle of the forest by myself and twisted my ankle. So I've been just, honestly, depressed…" Lee added: "I was starting to feel really good, and then it's, like, 'No, you're not.' It's fine. It's doing better. I'm going to get back to it."

After BLABBERMOUTH.NET published Lee's comments on Wednesday, she was inundated with well wishes on Twitter, with some fans expressing their concern about Amy's physical well being less than two months before the start of the HALESTORM tour.

Earlier today (Thursday, September 9),Amy took to her Twitter to write: "Thank you for the well wishes, guys! I'm ok, just a bad sprain but it's healed a lot already. I would have posted a picture of the bruise but it was so gnarly I'm afraid it would have been flagged for like, graphic violence. For real tho, I'm ok! See you soon! Get vaccinated!"

Thank you for the well wishes, guys! I’m ok, just a bad sprain but it’s healed a lot already. I would have posted a picture of the bruise but it was so gnarly I’m afraid it would have been flagged for like, graphic violence 😂 For real tho, I’m ok! See you soon! Get vaccinated!