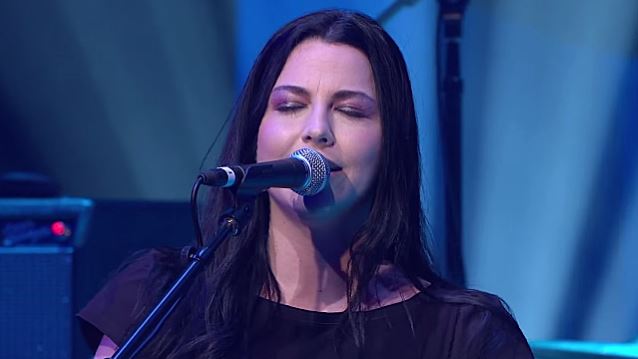 EVANESCENCE singer Amy Lee has released her cover version of the PORTISHEAD song "It's A Fire" via her newly launched YouTube channel. Check it out below.

Said Lee: " This song (and all of 'Dummy', actually) was a huge inspiration to me in my formative years. I listened to the song recently for the first time in a long time, and fell in love with it all over again. The lyrics are so powerful; they helped me through so much. It is my honor to do this little homemade homage to a group I have loved so much for so long."

Lee and Grammy nominees Dave Eggar and Chuck Palmer, in collaboration with former "Riverdance" stars and fellow Brooklyn artists Hammerstep, recently composed an original song for a brand new short film that combines sci-fi, martial arts and neo-Irish dance. "Indigo Grey: The Passage" is a seven-minute audio-visual experience that premiered at the 2015 Los Angeles International Short Film Festival and has so far been officially selected to screen at 14 international film festivals.

Written and produced by Hammerstep founders Garrett Coleman and Jason Oremus, "Indigo Grey: The Passage" was directed by award-winning, Brooklyn-based filmmaker Sean Robinson — who describes the short film as being about "taking risks and exploring the lines between fantasy and reality."

"Indigo Grey: The Passage" was officially released online September 13 and can be seen below. The film is based on Hammerstep's "Indigo Grey" — a live, immersive show experience, set to open in New York City in 2016. Stay tuned to www.hammerstep.com for more details.