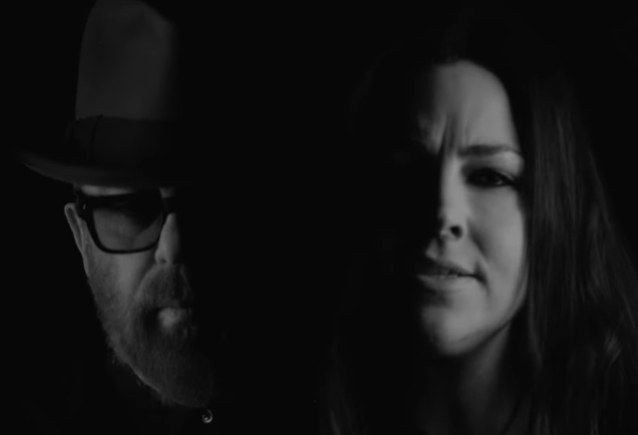 EVANESCENCE singer Amy Lee has teamed up with EURYTHMICS co-founder Dave Stewart to record a reimagined version of THE EVERLY BROTHERS classic song "Love Hurts". Stewart and Lee's inspired rendition of "Love Hurts" will be released on Friday, June 24 via Bay Street Records across all DSPs. Fans can watch the official music video for the song ahead of Friday's release.

"My collaboration with Amy happened by chance, but turned into a magical adventure," says Stewart. "She's a creative force and we work so well together. We quickly realized our version sounded nothing like the original but once we started, we couldn't stop!"

Lee adds: "A few weeks back Dave Stewart called and asked if I wanted to collaborate on the iconic EVERLY BROTHERS song 'Love Hurts'," adds Lee. "We clicked like magic and obsessed over it until it became this crazy new thing. I'm beyond excited about our new friendship and our new track."

With a career spanning four decades and over 100 million album sales worldwide, award-winning singer, songwriter, musician and producer Stewart is among the most respected and accomplished talents in popular music history. Stewart co-wrote and produced each EURYTHMICS album in his world-famous duo with Annie Lennox. He has also produced albums and co-written songs with Bob Dylan, Mick Jagger, Tom Petty, Gwen Stefani, Damian Marley, Stevie Nicks, Bryan Ferry, A.R. Rahman, Katy Perry, Sinead O'Connor, Aretha Franklin, Al Green and Joss Stone, and many others. He is currently working with Stone on the recently announced musical of "The Time Traveler's Wife", due to premiere later this year. His wide-ranging work has earned Stewart a long list of prestigious honors, including over fifty ASCAP and BMI Awards, four Ivor Novello Awards for "Best Songwriter," four BRIT Awards for "Best Producer" (including a Lifetime Achievement Award),a Golden Globe Award, and a Grammy Award. "Sweet Dreams (Are Made Of This)" by EURYTHMICS was recently inducted into the Grammy Hall Of Fame in recognition of its qualitative and historical significance, and Dave Stewart and Annie Lennox were among the 2020 inductees into the Songwriters Hall Of Fame with a ceremony taking place in June 2022. The Rock And Roll Hall Of Fame announced EURYTHMICS as 2022 inductees for their profound impact on music.

Beyond his creative work as a musician, Stewart is a renowned film and TV producer (including NBC's hit songwriting competition series "Songland"),author, photographer, public speaker, and entrepreneur. In 2010, Stewart established Dave Stewart Entertainment (DSE),a "media company for the new world" (Los Angeles Times),linking creative ideas to a host of projects in music, film, television, books, theatre, and new media. As the creator of content for DSE, Stewart has married his passion for music, film, and television by creating a number of high-profile projects.

Lee is a singer, pianist and songwriter, best known as the co-founder of the two-time Grammy Award-winning rock band EVANESCENCE. Having recorded five studio albums with the band and touring the globe many times over, Amy has made an impact on people around the world. The 2003 debut album, "Fallen", spent 43 weeks in the Billboard Top 10 and has sold more than 17 million copies worldwide, 10 million copies in the U.S. alone, crowning it diamond. The "Bring Me to Life" music video has also now reached more than one billion views on YouTube. In March of 2021, EVANESCENCE released its fifth studio album, "The Bitter Truth", featuring the songs "Wasted On You" and "Use My Voice", both of which were nominated for MTV Video Awards, as well as "Better Without You", a Top 10-charting song at U.S. rock radio, having spent an incredible 27 weeks on the chart.

Lee's solo work consists of a wide range of styles, from emotional end title themes, experimental film scores, a variety of collaborations and an album of children's music, to her unique reimaginings of songs in her growing library of eclectic covers. Some stand-out moments include her original composition "Speak To Me", the title song for the film "Voice From The Stone", directed by Eric D. Howell, "Aftermath", an album of music written for the film "War Story", directed by Mark Jackson, the 2015 children's album "Dream Too Much", fan-favorite covers EP "Recover", and some stellar collaborations with artists including BRING ME THE HORIZON, Lindsey Stirling, BODY COUNT and HALESTORM.

Lee and EVANESCENCE will be on tour this summer and fall across the U.S. and Europe.