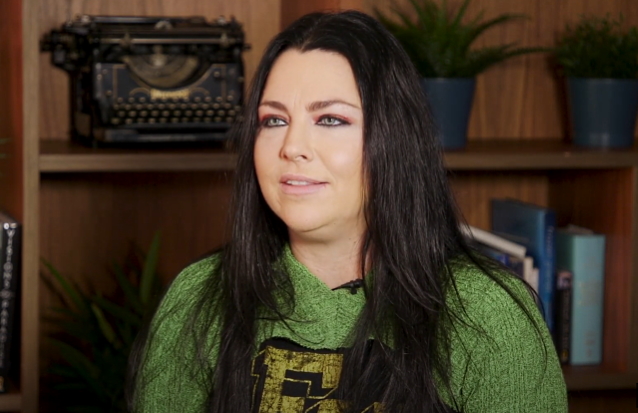 In a new interview with NME, EVANESCENCE frontwoman Amy Lee spoke about how being outspoken about sociopolitical and socioeconomic issues in and outside of her music has resulted in her being labeled a "bitch" by some people. Asked if that kind of criticism is something she cares less about as she gets older, she responded (as transcribed by BLABBERMOUTH.NET): "It's not that I care less; I just feel more confident in my decisions. And I guess, yeah, I care less when I think people don't get it or don't understand. I go, 'I'm not gonna worry and change what I believe or who I am because somebody might misunderstand or call me a bitch or whatever.' I'm not one — I'm confident that I'm not one. And I think that no matter what you do…

"I don't know… Especially when you're on a large stage… It was harder for me to understand this when I was 21 and we were just starting," she admitted. "But you can't expect everybody to really know you. They get to see a part of you and they get to see your music and they get to hear your voice and see the piece of you that is shown. But there's more to all of us. Just like I don't know them. So you've gotta kind of not be mad when people don't understand.

In August 2020, EVANESCENCE released a single, "Use My Voice", which was written to celebrate the power of speaking out in order to promote more justice in the world. The track, featuring contributions from THE PRETTY RECKLESS's Taylor Momsen and HALESTORM's Lzzy Hale, was chosen by HeadCount in the USA to encourage voters to register, check their registration, or find out about their remote voting options amid the COVID-19 pandemic at UseMyVoice.org.

Asked in an interview with Lisa Sanchez of the KLAQ radio station if she was concerned about potentially alienating some fans by speaking out on political issues, Lee said: "Well, first of all, we have an incredible team with us now, and my manager is so supportive about things like that. The art has to come first. And that's a given in everything that we've been doing about being true to ourselves.

"I feel like there's a way that you can have a strong opinion and still be respectful to your fellow humans that don't necessarily agree with you.

"We all have different family members and friends that don't believe exactly like we do and aren't on the same political path, or whatever, in this moment when things are so controversial and crazy," she continued. "But we can still love each other and we can still respect each other and we can certainly still listen to each other, and that's how it's all gotta start. And I feel like that's an important line in 'Use My Voice' — if we can't talk about it, we'll just keep drowning in it.

"I think that this is a year and a moment for awakening and conversation, and I wanna be a part of that.

"I got to a point in the studio — we were working on the song, and I just felt convicted by my own words.

"Being silent right now is a statement in itself and not one that I wanna make," Amy added. "So we can do that — we can be true to ourselves and still leave room for other people's beliefs as well. But I do think it's important right now to stand up for what you believe in, and also find your own information. Open your eyes and ears."

In May 2020, Lee said that she was " angry, horrified" and "ashamed" over the murder of George Floyd in police custody as well as then-U.S. President Donald Trump's response to the subsequent protests and riots.

Just three months earlier, Lee opened up about her political views for the first time, explaining that she couldn't "stand by" and keep her mouth shut while her "country's freedom is taken away." He decision to speak out was apparently prompted by the GOP-controlled Senate's vote to acquit Trump on both articles of impeachment without calling witnesses.

"The Bitter Truth" arrived in March 2021. The LP was produced by Nick Raskulinecz, who also worked on 2011's self-titled LP.