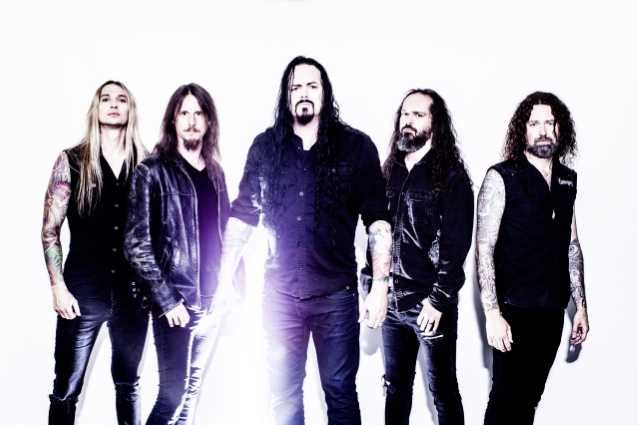 EVERGREY Confirms 'The Atlantic' As Title Of Next Studio Album

Swedish metallers EVERGREY have confirmed "The Atlantic" as the title of their 11th studio album. The follow-up to 2016's "The Storm Within" is tentatively due in January via AFM.

In an interview with Marielle Tengström of Metal Casino at this year's Skogsröjet festival which was held last month in Finspång, Sweden, frontman and founding member Tom S. Englund stated about the progress of the recording sessions for EVERGREY's next studio album (see video below): "We just finished recording and then some asshole broke in [to our studio] and stole a bunch of important stuff. We had a bit of a setback, so we're trying to figure that out still. It's going to be okay in the end, of course."

Regarding how their music has evolved since "The Storm Within", which was the second album since the return of longtime guitarist Henrik Danhage and drummer Jonas Ekdahl, Jonas said: "I think we're constantly progressing as musicians and songwriters. We don't feel that we have any boundaries. The boundaries are getting stretched more and more for every album that we do. I think it's awesome that we kind of have taken advantage of that and, of course, we always write what we feel like writing or are inspired by. On this album, we've stepped it up an extra notch, I think."

Asked whether he thought EVERGREY would still be around 23 years after their 1995 formation, Englund said: "Of course not. The first goal was to record one album then we kept on going. We're extremely proud to be around and still evolve, as Jonas said, but also still grow. We're not getting smaller. We're getting bigger. That's the huge advantage of not being huge. You can always go up a tad more. Yeah, but it's just great. We're enjoying ourselves. We're on our 11th album now and we still have much more within us. It's cool."

On the topic of EVERGREY's plans for the rest of the year, once the band has finished its current run of summer festival dates, Tom said: "This coming fall, we are taking a break, a well-needed one. Then we start to rehearse for upcoming tours that start on January 25, which is also the day we release 'The Atlantic'."

"The Storm Within" included a guest appearance by NIGHTWISH frontwoman Floor Jansen on the song "In Orbit".

Dahnage and Ekdahl both left EVERGREY in 2010 before returning in 2014. The band is rounded out by keyboardist Rikard Zander and bassist Johan Niemann.