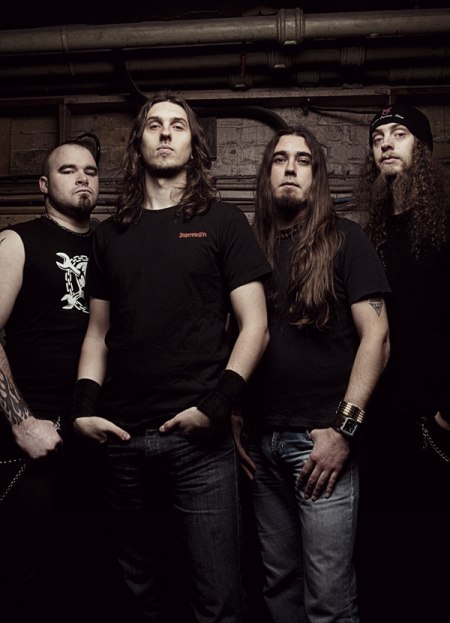 British thrashers EVILE are working on material for a brand new studio album.

EVILE, who recently won a coveted Metal Hammer Golden Gods award, will once again be working with producer Russ Russell.

"We've been playing around with the odd part and riffs since 'Infected Nations' came out in 2009.

"I have about ten song ideas which are being built on daily, but not going to stop there. We're not going to limit ourselves this time to a certain number of songs; we're just going to write until it's time to give up and go into pre-production.

"We've been sending tracks/recordings/ideas back and forth between ourselves, Russ Russell and our management (Wiseblood) and there's an excellent vibe going.

"I don't want this to be a typical 'new album' update using the same descriptions and words most bands use to big up an album, so I'll just say the new stuff is really getting my blood boiling and my heart racing.

"We've been through a lot over the past year, and it's being naturally reflected in the music which is coming out.

"I've never been as passionate as I am now about writing the best material we can.

"With [new bassist] Joel [Graham] in the mix, and him being a die-hard thrash fan since the '80s, I'm looking forward to see how this will turn out."

Graham joined EVILE following the tragic death of their previous bassist, Mike Alexander, who passed away on October 5, 2009 while the group was on tour in Sweden. According to Ol Drake, Mike died of a pulmonary embolism, a blockage of an artery in the lung.

Joel previously played in the Yorkshire metal band RISE TO ADDICTION, which recorded for Mausoleum Records.

EVILE earlier in the year released a digital-only single of the band's cover of PANTERA's "Cemetery Gates".

"Cemetery Gates" is available on iTunes, and also features a special version of EVILE's track "Time No More", with Japanese vocals/lyrics.