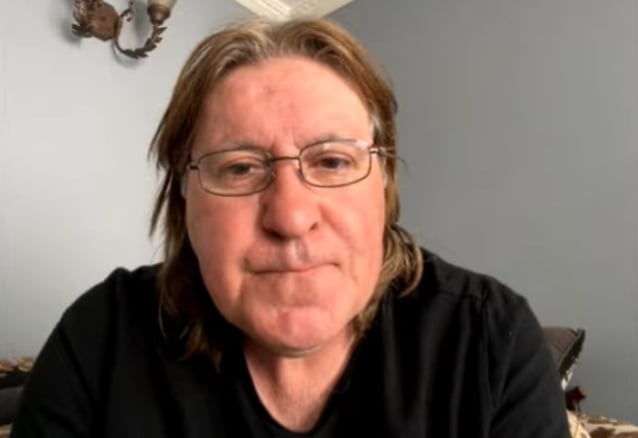 In a new interview with Australia's Heavy, former AC/DC drummer Simon Wright, who replaced Phil Rudd when the latter bowed out of the band in 1983 and was with them until 1989, playing on the albums "Fly On The Wall", "Who Made Who" and "Blow Up Your Video", reflected in his time with the legendary Australian hard rock outfit. He said (as transcribed by BLABBERMOUTH.NET): "I was in it for, like, seven and a half years or so, and there were a lot of big shows — like we did the Rock In Rio in '85 and stuff, and some of the Monsters Of Rock shows in England, at Castle Donington. You never cease to be overwhelmed by some of the stuff. You look out and there's four hundred, five hundred thousand people in Rio, and you're just, like, 'Wow. Keep your head down. Keep playing.'"

Asked which is his favorite of the albums he recorded with AC/DC, Simon said: "I don't know if I have one. I think there's good moments on each of 'em in a different way. It was all great recording all three albums, and it was really cool. A lot of people I meet — it's been a while since I did those albums, but I do meet people who tell me that they love this album, they love that and stuff, and some of them even say it's their favorite album. So it's all good. It's nice. I love meeting people and listening to what they think of albums like that, and the DIO albums as well I did. So it's all good."

A year and a half ago, Wright said that he was never approached about playing drums for AC/DC after Rudd was arrested for drug possession and threatening to kill an employee. "The phone didn't ring at all," Simon told SiriusXM's "Trunk Nation With Eddie Trunk". "I get asked that quite a lot. No, it didn't ring. I wasn't looking for it. I don't know. I wasn't expecting a call — put it that way — and I didn't pursue it, I must admit. I did hear some things about what was going on, but to have put my foot in it wouldn't have been cool. So, that's it. That's the way it goes. They didn't call. That's no problem for me. I've got lots of stuff to do."

Chris Slade ended up playing drums for AC/DC on the legendary hard rock band's "Rock Or Bust" world tour. Since then, AC/DC has recorded and released a new album, "Power Up", with Rudd sitting behind the kit in the studio.

Wright, who played drums for AC/DC in the 1980s, went on to say that he has no contact with his former bandmates anymore. "No, I haven't been in touch for years," he told "Trunk Nation With Eddie Trunk". "I did text [AC/DC bassist] Cliff Williams four or five months ago. I don't know why. I just congratulated him on his retirement and wished him well. And he texted me back and said, "Thanks. It's good to hear from you. I hope you're well.' But no, I don't really keep in touch with them. They've got their lives, and I've had my life for quite some time now. But if I ran into 'em, I'm sure we'd say hello."

According to Wright, fans shouldn't be surprised to know that he is no longer in regular communication with the AC/DC camp. "There's people that I've played with that I haven't kept in touch with," he explained. "And it's not a problem. You just move on. They've got their lives, and I've got mine. And I'm busy trying to figure stuff out and keep moving forward and all the usual stuff. I don't think it's unusual."

Wright, also known for his work in DIO, RHINO BUCKET and UFO, lasted in AC/DC for six years. Wright, a then-unknown drummer whose first credits included Manchester, England metal outfit A II Z, joined AC/DC in time for the touring cycle for "Flick Of The Switch" and played with the Australian rockers throughout the '80s before leaving to join DIO in 1989.

Slade originally followed Wright in AC/DC's lineup, joining in time to play on 1990's "The Razor's Edge" album. When Rudd returned in 1995, Slade was shown the door and harbored some bad feelings about that for a while.

Listen to "Paying Respect To The METAL GODS With SIMON WRIGHT" on Spreaker.
Find more on Ac/dc