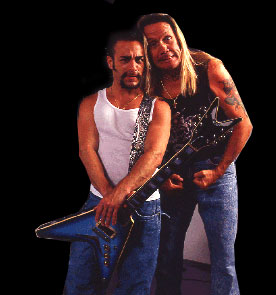 Former ANTHRAX guitarist Dan Spitz and IRON MAIDEN drummer Nicko McBrain have joined forces in a brand new project that is "currently recording an extremely heavy album," according to a message posted at the web site of Dean Guitars, with whom Spitz has an endorsement deal. "Together they have sold more than 60 Million albums and have earned six Grammy Nomimations. Dan Spitz, founding member of ANTHRAX and the Godfather of rap-meets-metal, has picked up his guitar again."

We will have more information on this most unusual of pairings as soon as it becomes available.