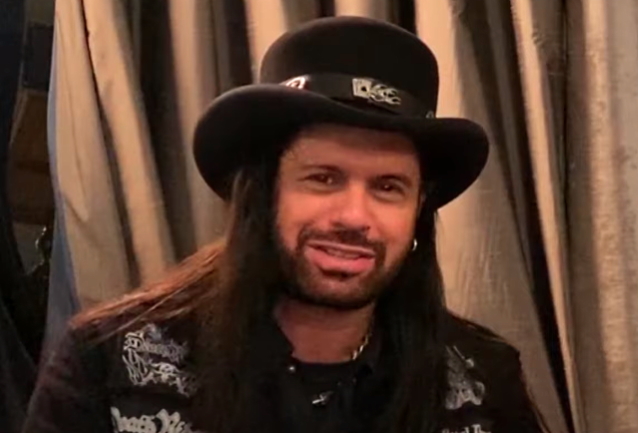 Former ANTHRAX frontman Neil Turbin says that he is open to the idea of taking part in a special concert featuring most of the singers that have fronted the band over the course of its nearly four-decade existence.

ANTHRAX has had a number of vocalists — including Turbin, Joey Belladonna, Dan Nelson and John Bush — over the last 39 years, with guitarist Scott Ian and drummer Charlie Benante remaining the sole bandmembers who have appeared on every one of the group's studio albums.

In a recent interview with "The Jasta Show", Ian was asked if ANTHRAX could ever embark on a special celebratory tour that would include Turbin, Belladonna and Bush performing a short set of songs from each singer's era of the band, Ian responded, in part: "Could we? If everyone's alive, yes, the answer would be we could. But — and that's a huge 'but' with two Ts — do we want to? That's more the question to ask.

"I'll admit — that thought, in my lifetime, has crossed my mind, this idea of imagine doing a career retrospective kind of a thing," he continued. "And, of course, it's possible, but I don't know that's something — me, personally; speaking specifically for me, not anyone else in the band or any other singers that aren't in the band anymore — it's not something I would wanna do.

"Depending on the scenario and how we did it, where maybe — let's just say, could you imagine, so you start with 'Fistful' and you do a short set of that, and then maybe there's, not an intermission but there's a break with some kind of a set change. Maybe in the set change, there's some type of video montage showing what happened between 'Fistful' and 'Spreading The Disease', if that footage even exists; I'm just totally spitballing here. Then we come out and we do that era, and so on and so on. And, of course, it could be an unbelievable thing if it was produced properly and it all worked, and from a creative standpoint, it could be something amazing and I'm sure the fans that got to see it would be blown away. I don't necessarily see it as something that could be done as a tour. That sounds like something you set up in one spot and you do maybe multiple shows at a theater somewhere in New York, and then you move it to another city and do a few. But it's not something you can schlep around on a tour bus."

Turbin addressed Ian's comments in a brand new interview with Canada's The Metal Voice. Speaking about the possibility of sharing the stage with Bush and Belladonna, Turbin said: "John Bush is great; I love John Bush. It was really super cool of John to give me an interview [for The Metal Voice] the first time I met him in person [earlier this year]. I've met other members of ARMORED SAINT and they've always been cool; we've always been friendly with one another. And having the opportunity to meet John and speak with him was really quite awesome. He's a great singer and a great guy — very cool. We discussed about some things off camera as well, so it was really cool to meet John. I'd love to do shows with John. He is a super dynamic person and, obviously, a great singer. And, obviously, ARMORED SAINT is a very well-respected, legendary band. And personally, I'd love to have the opportunity to do shows with John and with ARMORED SAINT; if that opportunity arises, I'd certainly be open to that."

Turbin went on to bring up MICHAEL SCHENKER FEST and HELLOWEEN as examples of bands who have been able to tour and record in recent years with two or more singers performing alongside each other.

"As far as what MICHAEL SCHENKER FEST did and what HELLOWEEN did, I think what those bands have done and the way they approached things, I think they've done things with class and with respect for the bands," he said. "So, yeah, there is certainly a value to presenting something like that. However, I think it really boils down to, what do the fans want? It's what the fans want that matters. If that's something that would bring the fans out, I think it's something that's interesting about a band.

"People are gonna have differences in life," Turbin added. "That doesn't mean people are gonna agree, especially on issues or personalities or whatever it might be. To me, it just shows a side of the band that they're capable of doing that. And I respect MICHAEL SHENKER FEST, I respect the fact that Graham Bonnet and Michael Schenker would even set foot back on stage [with each other considering their past issues]. I think it's great, 'cause these are strong personalities, and to get 'em to come together, I think it's great that they were able to do that. Not everybody on this planet is gonna play nice together."

Neil circled back to the idea of him performing with ANTHRAX again, saying: "If that's something to consider, I would be open to considering that. But there's a lot of moving parts, and there's a lot of things to consider." He then clarified: "Not to be misinterpreted by the media, I have my own bands that I'm involved with, I have musical things that I'm working on and songwriting that I'm working on in different genres, so I'm not really looking to join any band that I used to be in — I'm not really looking for that; that's not my expectation. And in fact, I've not been approached and I haven't had a conversation or a discussion or heard anyting about anything like that. So it's not really something that is a plan of any sort. However, just making that statement, I think it would be up to the fans."