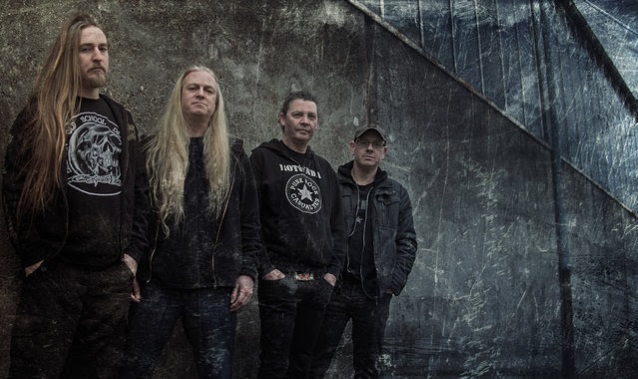 Rich from HRH TV conducted an interview with vocalist Karl Willetts of Birmingham, United Kingdom death/grind metal outfit MEMORIAM, which features current and former members of veteran U.K. extreme metal acts BENEDICTION and BOLT THROWER, prior to their February 18 appearance at HRH Metal festival at O2 Academy in Birmingham, England. You can watch the entire chat below. A few excerpts follow (transcribed by BLABBERMOUTH.NET).

Karl: "It's a very quick turnaround from our debut album, which came around about the same time last year, 'For The Fallen'. We're a band that's all about moving forward at an incredibly fast pace. We're a band that's trying to create that old-school death metal feel and trying to recreate those feelings and vibes that were involved when we first started out as a band. Back in the '80s, we moved at a very fast pace. Every other year, there was an album release, so, we're all about trying to create those feelings of joy. We're in a place where we are very inspired, musically. For a number of years, I hadn't written lyrics or vocals, so to be in this place and privileged position to be able to write another album, is a great place to be. We're already in the process of writing songs for the next album. We try not to dwell too much on what we're doing and move forward. We're very aware that life is short from our experiences of losing people that were close to us within the industry, [BOLT THROWER drummer] Martin ['Kiddie' Kearns], in particular. That's led us to understand that you have to move forward and take advantage of the situation that's given to you and try to create as much positivity as we could possibly do. And, we've really enjoyed the pace we're working at. As I said, we don't try and over-produce what we're doing. We don't go back and re-work it and try and take away or make it different because we find that old-school death metal is all about that authenticity and that genuine emotion that's involved in the writing of the songs. We're really enjoying that process. Such a lot has happened to the band in such a relatively short space of time. With the band I was in previously [BOLT THROWER], a new album was written in maybe five years. Maybe a half-dozen shows a year, which was great. I really enjoyed that, it was fantastic, I can't detract from the experiences I had in the past. But, to be in this position at this point in our lives is a real privilege. We owe that to our fans and followers and the people who are really into us. We're just taking every moment that we can for what it is and doing it on our terms, which is a beautiful thing."

On whether the vibe in MEMORIAM is different from BOLT THROWER:

Karl: "With BOLT THROWER, we grew and developed over a long period of time. It almost got to the point with the band, toward the end, the latter stages, that we only did a handful of shows a year, which were very special gigs because we didn't do that much. The bond between the band was something that was a very strong thing. Beyond the band, there was no real kind of social activity. We got together to rehearse for the gigs, then we did the gigs, then we probably wouldn't see each other for six months until the next shows came up. With MEMORIAM, there's a very definite, strong bond of friendship involved in what we're doing. MEMORIAM is all about touching base with the past to make sense of where we're at in this point in our lives and in the process of moving forward. Working with MEMORIAM, the initial stages on why I wanted to do this was to create some joy, some happiness, some light in an otherwise… following the death of Martin. The first thing that came to mind was I want to do a band, I want to create something new, I want to create something different. I wanted to work with [Andrew] Whale [drums]. He's been a friend of mine for 30 years. I always felt I owed it to do something with him creatively again. It was almost unfinished business there. That level of friendship is something you can't buy. It's a genuine brotherhood that we've got. Of course, Frank [Healy] is involved with the band. He had to be the bass player in MEMORIAM. We've been friends for 30 years, BENEDICTION came on tour with BOLT THROWER many times. We always had those social evenings out where in the pub at one in the morning, like 'We've got to put a band together.' But you never do because life takes over and things take control and our direction was never the same. This was an opportunity to do something with some really close friends, which makes things very different. Scott's [Fairfax, guitar] comes along as well. He's new to us in many respects. He brings a new sphere of influence in what we're doing. He played with BENEDICTION live, a South American tour, so we knew he knew Frank very well, which is quite difficult. [Laughs] He's a character. Yeah, the bond between us is something really special. I think that comes across in the chemistry when we play live. I think people can see that we genuinely enjoy doing what we do together. They feed on that. And we feed back off that. In that respects, it really works well."

Karl: "Who knows what the future lies? That's one thing, you don't know what's around the corner. We just anticipate we'll enjoy what we're doing. Doing things on our terms is really important to us. We're not really driven financially, we're driven by doing the things we want to do and playing places that maybe we never played before and doing shows that maybe we've played before, but we really enjoyed. That's really what drives us. Yeah, we got the new album coming out, which will take us through 2018. Following that, we're going to have the next album, which we're already in the process of writing, which will take us through the following year. We'd really like to do an album of cover versions, which was the original concept of doing the band. There's a long process for MEMORIAM. There's a long, bright future ahead for us all as long as we survive. [Laughs]"

"The Silent Vigil" will be released on March 23 via Nuclear Blast. The follow-up to last year's "For The Fallen" once again features artwork by Dan Seagrave (BENEDICTION, DISMEMBER, HYPOCRISY, SUFFOCATION). 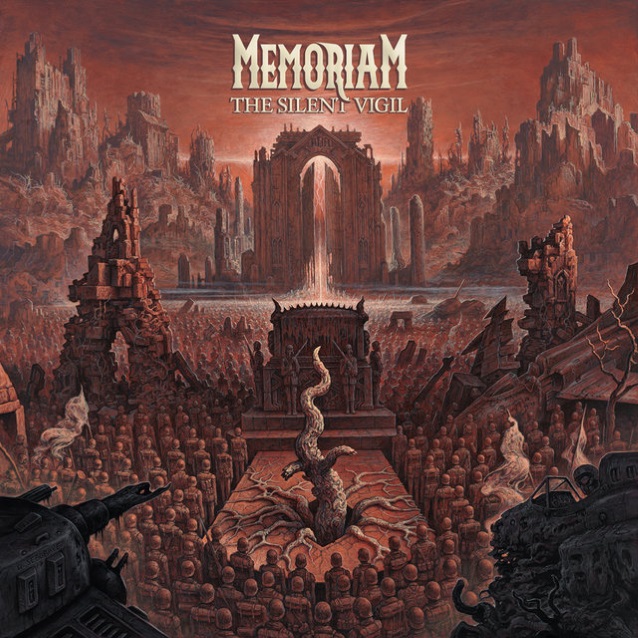