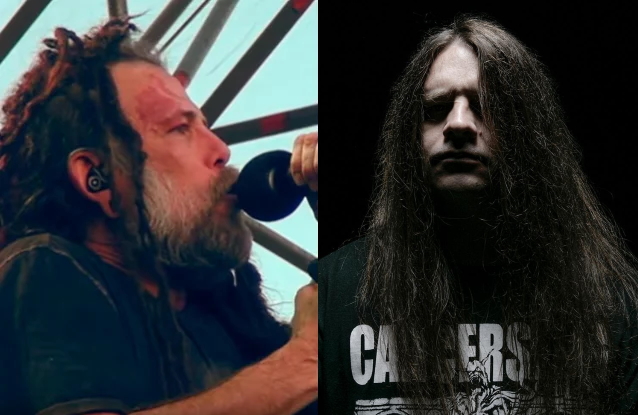 Former CANNIBAL CORPSE singer Chris Barnes says that watching a recent video discussion about the state of death metal featuring some of the genre's top vocalists, including his CC replacement, George "Corpsegrinder" Fisher, made him "physically ill."

On January 19, Knotfest livestreamed "A Death Metal Round Table" hosted by Staypuft Mallow and featuring appearances by Fisher, Trevor Strnad from THE BLACK DAHLIA MURDER, Chase Mason from GATECREEPER and Alex Jones from UNDEATH. According to Knotfest, the four singers discussed "their early influences, the accessibility of the genre, inspiration from the weirdest places, live show between-song patter, their upcoming releases and tours and much, much more."

Earlier today, Barnes — who exited CANNIBAL CORPSE in 1995, one year after the release of the band's "The Bleeding" album — took to his Twitter to write: "I just watched a 'death metal' podcast on YouTube that was done about a week ago with the 'top' death metal vocalists .. it made me physically ill. I despise what this genre has become." A short time later, HATEBREED frontman Jamey Jasta, who hosts a popular video podcast called "The Jasta Show" and who co-produced Fisher's upcoming debut solo album, replied: "come on the podcast & discuss". Chris responded: "No thanks brother. I have no need to jump on that bandwagon you guys got that". Jasta fired back with "Weak", to which Barnes said: "Ain't here to play that game. You have fun tho bro." Jasta then wrote: "you're the one playing games, you 'hate what the genre has become' but do you ever promote or discuss new bands or try & help build anything in the genre?" This prompted Chris to respond: "Lol promote lol hahahahaha". Jasta then countered: "Oh right that’s beneath you lol", to which Barnes said: "Nah I'm just not a shill..."

After Barnes left CANNIBAL CORPSE to form SIX FEET UNDER, he was replaced in the former band by Fisher.

Fisher's solo album, titled "Corpsegrinder", will be released on February 25. The 10-song effort was co-produced by Nick Bellmore (DEE SNIDER, KINGDOM OF SORROW) and Jasta and will be made available through Jamey's new label, Perseverance Music Group.

I just watched a “death metal” podcast on YouTube that was done about a week ago with the “top” death metal vocalists .. it made me physically ill. I despise what this genre has become.

No thanks brother. I have no need to jump on that bandwagon you guys got that

Ain’t here to play that game. You have fun tho bro.