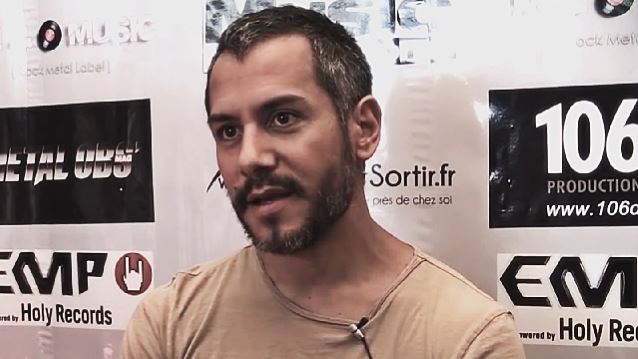 Former DEATH and current CYNIC member Paul Masvidal (guitar, vocals) spoke to France's TV Rock Live about his decision to openly discuss for the first time his sexuality in the context of his band's music.

Masvidal, 43, came out to friends and family in 1991 and later began exploring drag bars and gay nightclubs while on tour. His CYNIC bandmate, Sean Reinert, also 43, took a bit longer to come out.

"Sean and I have been living this way, as gay men, for over 20 years, so it wasn't something that we weren't comfortable with ourselves," Paul told TV Rock Live at this summer's Hellfest, where he performed with the DEATH tribute project DEATH TO ALL. "But in terms of associating it with our work, which we always wanted to just keep the focus on the music; we were concerned that it would become all of a sudden, 'They're the gay band' or something. But, thankfully, it seems like it's been very positive. And the scene's been open; it's come a long way. And in our minds, it was an opportunity to really kind of speak for other people, the kids out there that don't have someone in their scene who's homesexual."

He continued: "It's one of those things where it's nice to kind of… I don't know it was… I think Harvey Milk [American politician who became the first openly gay person to be elected to public office in California] said this… He was one of the big, forward-thinking… He said that everybody who's gay should come out, regardless of what profession you're in, because we're a minority, and regardless, you should be out there with it. It just helps the whole thing along, you know, so… That's how I felt about it. It was, like, 'It's about time to just talk about it.'"

Asked if he was surprised at the reaction from the metal scene to Masvidal and Reinert openly discussing their sexuality in a Los Angeles Times article this past May, Masvidal said: "I was, actually, a bit surprised. I mean, it started with the Los Angeles Times, the cover story, and all then all the press picked it up. And it seemed like it got a lot of attention, but in the right way; it wasn't bashing. There was little things here and there, but most of those people keep to themselves."

He added: "I think most people born post-1980 [or] -'85, they're not fazed by it in the same way, especially if they grew up in cities, as to where 20 years ago, it was a different mindset, I think, and even 10 years ago. So we've come a long way. But we still have a long way to go. There are still seven countries in the world where it's punishable by death to be homosexual. I mean, we still have a lot of work to do."

JUDAS PRIEST singer Rob Halford, who revealed he was homosexual during a 1998 appearance on MTV, commended Masvidal and Reinert (drums) for speaking out about their sexuality, telling Metal Injection: "I really applaud the guys from CYNIC for standing forward and just telling… They didn't need to do that. I didn't need to do that. They did it for themselves, like I did for myself. It might appear to be a bit selfish, but it's not.

"I always quickly say: you set yourself free, you stop all the lying, you stop all the innuendo, you stop all the damaging, attacking comments, because they bounce off you. Because [you go], 'That's who I am. That's what I am. What are you trying to say? You can't attack me anymore, because I'm now bulletproof because of this honesty.'

"So I applaud them. I think it's really, really cool. And I can't wait to see them."