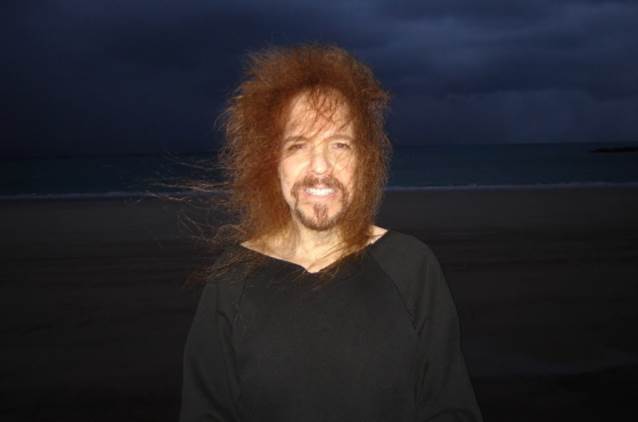 Former DIO keyboardist Claude Schnell has slammed the Ronnie James Dio hologram, calling it a "travesty" and "disrespectful" to the singer's memory.

Schnell, who joined DIO in May 1983, after the "Holy Diver" was released but before the accompanying tour was launched, offered his opinion on the holographic version of Ronnie during a lengthy interview with the "Ouch You're On My Hair" podcast.

"To the fans who like it, good for them," Claude said (hear audio below). "If it makes anybody happy, then it's a good thing. Personally, I think it's a travesty; I don't think it's something that should have been done. But, of course, bear in mind that I'm the first to acknowledge that my opinion means crap — who cares? But personally, I think it's disingenuous to the memory of the man.

"If you were lucky enough to know who he was in life, and if you were lucky enough to see him in life and to enjoy him and his music, that should be enough," he continued. "To go ahead and use technology to try to… it just seems… It's not quite this word, but I don't think there's a word that puts it lighter than this, but it just seems disrespectful to his memory. And I'm not even addressing the fact that some will argue that it's just a cashgrab and it's a way for Wendy [Dio, Ronnie's widow and manager] to find herself making more money off his memory, which that's not here or there, and I'm certainly not about to stand in judgment of what other people do. But just in principle, I don't think it's right. But that's me. What do I know?

"Under the best circumstances, a hologram is, obviously, a hollow version of who the person was. And maybe if it's Michael Jackson, it doesn't matter; if it's Elvis [Presley], it doesn't matter; but when it's somebody who lives in my heart to this day, I just can't see… For one thing, I can't understand how Wendy can be okay with it, but that's between her and her own values. To go full circle, to me, it just seems like a travesty."

Wendy Dio, who is a member of the Eyellusion team, recently said that the people that criticize the Ronnie James Dio hologram should at least see it in person before voicing their disapproval. "Don't criticize it if you haven't seen it," she told "Whiplash", the KLOS radio show hosted by Full Metal Jackie. "It's done with love. The band love doing it. And we just wanna keep Ronnie's memory and his music alive."