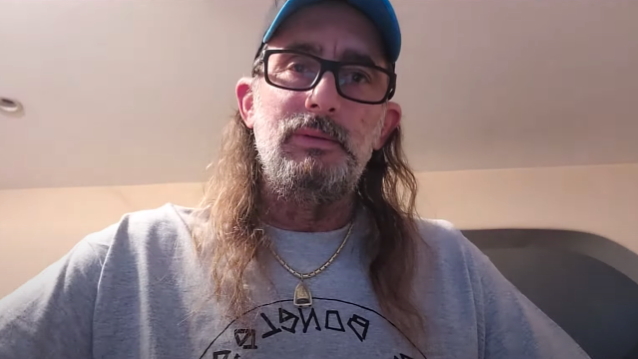 Former EXODUS guitarist Rick Hunolt was recently interviewed for EXODUS singer Steve "Zetro" Souza's Zetro's Toxic Vault YouTube channel. During the chat, Rick, who joined EXODUS in 1983, several months after the departure of Kirk Hammett, was asked why he thinks METALLICA's James Hetfield and Lars Ulrich chose Hammett to replace Dave Mustaine just prior to the recording of the "Kill 'Em All" album. He responded (as transcribed by BLABBERMOUTH.NET): "This is why I think James chose Kirk. It's because Dave and [Kirk's] styles back then were similar — pentatonic, bluesy. James didn't want no effects on his shit. He wanted Kirk to play dry — no echo; just a real dry Marshall tone. Wah-wah [pedal] is cool, I guess. But he had a similar style to Dave. Individually, personality-wise, [they were] completely two different human beings.

"Back in the day, when you went to go see METALLICA, the reason why you went to go see METALLICA is because we wanted to go see Dave — that's it," Rick continued. "Dave played lead guitar. He spoke in between songs. James sang — that's all he did. He didn't play rhythm guitar. It was the Dave Mustaine show. Period. That's it. And he was funny as shit — drunk. Oh, God, he was awesome. Dave was, like, the king back then.

"How you get kicked out of your own band, I don't know," Hunolt added. "I don't wanna talk about that… But as far as I'm concerned, personally, Dave Mustaine is the godfather of thrash metal."

Hammett was a member of EXODUS's original lineup before replacing Mustaine in METALLICA. In fact, Hammett was not only the person who came up with the EXODUS name, but also the first from the band to meet singer Paul Baloff and brought him into EXODUS.

Although EXODUS rarely gets mentioned alongside the so-called "Big Four" of 1980s thrash metal — METALLICA, MEGADETH, SLAYER and ANTHRAX — "Bonded By Blood" inspired the likes of TESTAMENT, DEATH ANGEL, VIO-LENCE and many others to launch their careers and is considered one of the most influential thrash metal LPs of all time.

Less than a year ago, Holt was asked if Hammett was involved in the songwriting for any of the material that ended up on "Bonded By Blood". He told the "Put Up Your Dukes" podcast: "There were riffs that I had written while Kirk was still in the band, and he tried to adapt them, tried to change 'em a little bit — the old, 'I changed it a little bit. I'm a co-writer on this riff.' And that was, like, two riffs, I think. And the rest of 'em were written after he left. We never used a Kirk Hammett riff, ever, until [2004's] 'Tempo Of The Damned' [album] when we recorded [the early EXODUS song] 'Impaler'."

Explaining that "the first two [EXODUS] songs finished post-Kirk Hammett were 'Strike Of The Beast' and 'No Love'," Holt continued: "The biggest talent I have, if you wanna call it a talent, is my fucking memory. I can remember fucking everything. I remember showing him… I can picture it as a film, showing Kirk the riff to 'Strike Of The Beast', and I can picture it as if I'm watching it on a film — in the jam room, me in my spot where I played him [the riff] and him wanting to change the higher note to a lower note; I remember it all as if I'm watching a movie of it. I remember all of it — every last minute of it. I remember details from fucking most meaningless shit."

Back in 2018, Kirk spoke about the fact that riffs from songs by EXODUS, "Die By His Hand" and "Impaler", found their way into "Creeping Death" and "Trapped Under Ice", from METALLICA's "Ride The Lightning" album. "What I think happened was when Lars [Ulrich, METALLICA drummer] and James [Hetfield, METALLICA frontman] were thinking about getting rid of Dave [Mustaine], our sound guy, Mark Whitaker — who was EXODUS' manager — gave them EXODUS' demos," Kirk said. "I think 'Die By His Hand' might have caught their ears. So when they were writing 'Creeping Death', they went, 'Great. 'Die By His Hand'. Put it right there.' It was definitely not me going, 'I have a riff here in this EXODUS song, and it needs to be here in this METALLICA song.' By the way, I wrote that 'Die By His Hand' riff when I was, like, 16 years old."