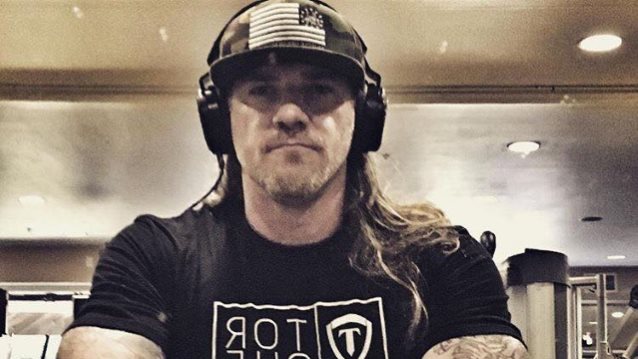 Christian Olde Wolbers, who handled the bass duties in FEAR FACTORY for nine years (1993-2002) and then assumed the role of guitarist in a revamped version of the band from 2002 until 2008, says that "there would be nothing better" than for FF's classic lineup to reunite and make a new studio album.

After FEAR FACTORY disbanded in 2002, the band reformed in the same year without guitarist Dino Cazares, but with Olde Wolbers moving to guitar duties and Byron Stroud being brought in on bass. That lineup made two albums — 2004's "Archetype" and 2005's "Transgression" — and then took a break. Meanwhile, Cazares formed the band DIVINE HERESY and recorded two albums with the group before rekindling his friendship with singer Burton C. Bell and launching a new version of FEAR FACTORY, also featuring Stroud and acclaimed extreme metal drummer Gene Hoglan.

During an appearance on "The Ex-Man" podcast hosted by former GOD FORBID guitarist Doc Coyle, Olde Wolbers said that he and drummer Raymond Herrera are "still going through a huge legal battle" with Cazares and Bell but expressed hope that the classic FEAR FACTORY lineup could make a comeback.

"I've been trying to reach out and try to get this reunion thing happening," Christian revealed (hear audio below). "There would be nothing better for this band [than] to reconcile our differences, fucking write a killer record, which I know we can, and fucking we would be doing really big tours. My passion for playing and what we have invested in this band is very big, and I know it's really big for Dino as well, 'cause he started it with Raymond back in the day."

He continued: "We could do really good tours. I mean, we could probably go open up for METALLICA the whole entire run right now, because they're bringing out this new record. The impact of us reuniting and going out there and doing it with a good record could be…" Christian trailed off before adding: "It's sad that we haven't gotten those phone calls yet."

Olde Wolbers also talked about how the diminishing music industry has forced bands to find new ways to survive, even if it means constantly changing members in order to keep the groups financially viable.

"This happens with so many bands — the same shit," he said. "And I'm not talking about FEAR FACTORY right now, I'm just talking about bands out there that where one or two people decide, like, 'You know what? There is money in this company. There is money in this band. We can just root out three other guys, or the other guys, and just hire people, pay them nothing. Because there's people [lining up] waiting to play for us for five hundred dollars a week, for PDs [per diems], if we have to.' And there's a lot of bands out there where you only see the singer that's the original member and he's holding it together. 'Cause a lot of times, unfortunately, the singer is usually the one that can keep it together. That's why I have tremendous respect for bands today that… And so many singers are tyrants too, and the way they run their ship is, like, 'I run my ship the way I run it, and this and that. And get the fuck out if you don't like it.' And I've seen many bands like that. But I do have respect for bands where… like MACHINE HEAD. If it wasn't for Robb Flynn, that band would have been… He held that band together for so long and had to deal with all the bandmembers switching out. But at the end of the day, because he has such a stong personality and he's a businessman and that's his band, that band is still around, functioning like a really well-oiled machine, and that's something I do miss about FEAR FACTORY."

Despite the fact that he had played bass in FEAR FACTORY for almost a decade, the Dutch-born Olde Wolbers had started his career as a guitarist, having handled the axe in several groups in Belgium prior to joining FF in 1993.

"If [FEAR FACTORY] would reunite tomorrow, I would definitely [do it as] as the bass player, and I wouldn't even want nothing to do with the guitar besides maybe showing Dino a riff here and there, like, 'Hey, I wrote this riff. You like this or that?' You know what I mean?" Christian said. "Because it's all writing with the drummer. With FEAR FACTORY, it's all about writing with Raymond and getting the structure down."