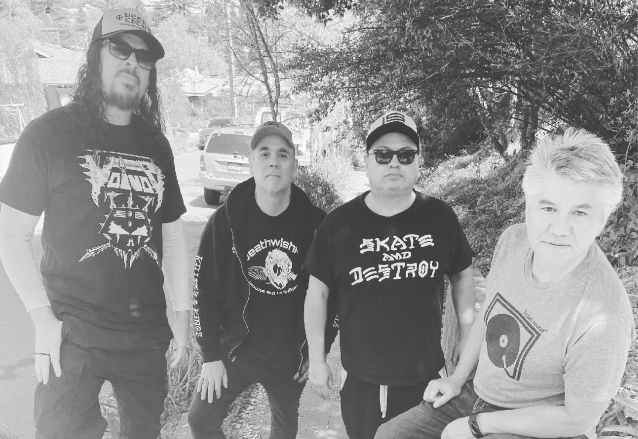 BONELESS ONES formed in 1984, inspired by Thrasher magazine's skate rock tapes and driven by many skate-related bands of the time. After two years of playing countless shows across California, BONELESS ONES recorded and released its debut album, "Skate For The Devil", It was quickly eaten up by not only skateboarders, punks and metalheads, but it also gained mainstream attention from reviews and interviews in Playboy, Creem and, of course, Thrasher, which backed these guys from the start.

The members of BONELESS ONES went their separate ways in the summer of 1987. But after a three-and-a-half-decade break, they are back. And, with Craig's help, are ready to carve a new spot in crossover history.

Commented Locicero: "I was one of the lucky kids who witnessed the BONELESS ONES play their legendary show on the UC Berkeley campus. That gig stuck with me to this day. Luke was a ripping guitarist and the entire band was on fire! It's an honor to play his parts and add to their legacy. Max, Troy and Chris are all legends in the punk/skate rock scene. The BONELESS ONES were legit! All of the newer and older material is jumping off with energy and sounds electric! It's also a side bonus for me to play heavy, punk and trashy tunes with Kontos. We really never had a chance to do that until now. It's so much fun to be a part of their relaunch. I'm more than happy to be a part of the fun. Because make no mistake about it, the BONELESS ONES are all about fun."

Added Kontos: "I'm so excited to finally be playing some kick-ass metal/punk/crossover music with Craig Locicero. Over the years, Craig and I have made some incredibly cool music in SPIRALARMS, but this is a completely different animal with the BONELESS ONES. The energy and vibes are perfect. Craig brings that old-school Bay Area style back to the band, and Max, Troy and myself could not be more enthusiastic about having him with us. The new BONELESS ONES record is going to be amazing!"

BONELESS ONES recently went out to Mojo Garage in Redwood City with Joe Miller to capture six live songs for fans to enjoy. The first track, which can be heard below, is a brand-new tune called "Heavy Is The Face", which was brought in by Craig at the band's very first rehearsal with him. The entire six-song set will be broadcasted on the event called "May The Fourth Be With You" on May 4. The set includes some BONELESS ONES' classics as well as two more brand new tracks called "Cops And Robbers" and "Tied To A Stake".