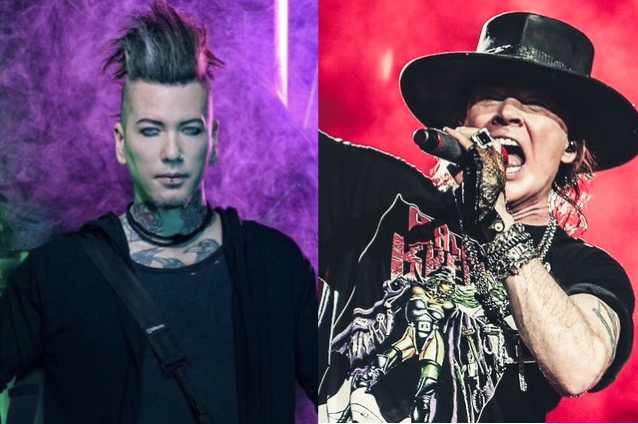 In a new interview with Anne Erickson of Audio Ink Radio, DJ Ashba was asked what his favorite memory is from his time with GUNS N' ROSES. The guitarist responded: "There are so many memories from that six, seven years. I think the biggest memory, when I think back on those days, it's just how probably misunderstood Axl [Rose, GUNS N' ROSES singer] is. He's just — to me; I can't speak for other people — but he's just one of the fucking coolest guys to hang out with. When he's your friend — he has a very tight circle, but when you kind of gain his trust and are in that circle — you couldn't find a better fucking dude. He's just a cool fucking dude. And we had a ton of fun — on stage and even more fun off stage."

Asked if he still keeps in touch with Rose, Ashba said: "Not too much, but the minute we see each other, I'm sure there's gonna be big hugs thrown. We have so much respect for each other, I believe. I miss him. I miss him to death as my buddy. But they've been on tour. They've been nonstop busy, and I've been slammed busy, and that's kind of how this industry is. Your paths will cross one day, and it's just how it is. It's like a traveling circus. [Laughs]"

Ashba previously discussed his departure from GUNS N' ROSES in a November 2016 interview with SiriusXM's "Trunk Nation With Eddie Trunk". He stated at the time: "Well, there [were] multiple reasons [why I left GN'R] — a couple that I won't go into — but the biggest reason was I needed to get back to my roots, back to what I really truly believed in, and that was playing songs I helped write with [SIXX:A.M. bandmates] James [Michael] and Nikki [Sixx]. We [SIXX:A.M.] have five albums out [and] we have a ten-year career together. So we did a tour, 'Modern Vintage' tour, where it was, like, nineteen shows, and that tour really changed my life and put my career back into perspective — you know, being out on the stage and connecting with the fanbase."

Ashba also once again claimed that he was asked to stay in GN'R for the "Not In This Lifetime" tour, but that he decided against it, preferring instead to pursue his own career path.

Four years ago, former GUNS N' ROSES bassist Tommy Stinson said that he found it "funny" that Ashba "made such a big deal about" quitting the band at a time when "there wasn't really anything going on" with the group. Stinson, who was in GUNS N' ROSES from 1998 until 2014, told HardrockHaven.net: "[DJ] called me up on the phone and told me that he was gonna quit, you know, and this that and the other thing… [It] seemed like it was kind of inevitable that there was going to be a reunion happening, so I think he… I don't know if he [laughs] tried to get in front of the curve to, you know, drum up some extra fucking press for himself. I don't really know what the deal was, but I thought it odd. I thought it an odd time to make a big stink about quitting, you know?"