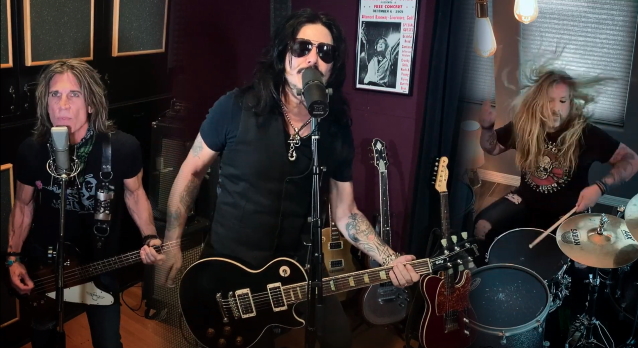 Former GUNS N' ROSES guitarist Gilby Clarke has teamed up with bassist EJ Curse and drummer Troy Patrick Farrell to record a cover version of HEARTBREAKERS' "Born To Lose". The track, which was originally released as part of "The Bowery Electric Presents: Live Premiere Series", was produced by Gilby at his Los Angeles recording studio, Redrum Recording, where he's also helmed records for such artists as L.A. GUNS, THE BRONX, BEAT ANGELS, BULLETS AND OCTANE and many more

Clarke recently completed work on his long-awaited new solo album, "The Gospel Truth", due later this year via Golden Robot Records. The disc was produced and written by Gilby at Redrum, and was mixed by Grammy Award winner Chris Lord-Alge and mastered by Maor Appelbaum. Joining Gilby on the LP are Muddy Stardust on bass, Kenny Aronoff (JOHN MELLENCAMP, JOHN FOGERTY, CHICKENFOOT) on drums, along with Matt Starr (ACE FREHLEY, MR. BIG) and Chad Stewart (FASTER PUSSYCAT, L.A. GUNS) on backing vocals.

This past April, Clarke released the official music video for his first single, "Rock N Roll Is Getting Louder". The Christopher C. Pearson-directed clip was shot in Palmdale, California and downtown Los Angeles, while the band performance footage was filmed in Hollywood club Oh My Ribs!