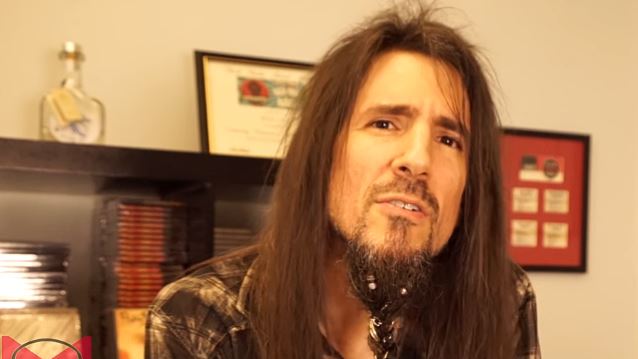 Former GUNS N' ROSES guitarist Ron "Bumblefoot" Thal has revealed that he was diagnosed with bladder cancer again three weeks ago — less than three years after his initial diagnosis.

Thal underwent surgery to remove two tumors the day after his August 11 appearance with METAL ALLEGIANCE in Brooklyn, New York and reports on his Facebook page that "all is fine." As it is very common for bladder cancer to re-occur, Thal will go for three-month re-checks for the next two years.

The guitarist also wrote that nodules were discovered on both of his lungs, but added that they were "too small to crack the chest open for." He will "re-check those in a year for changes," and figure out how to proceed from there.

Ron previously underwent surgery in January 2014 to remove a cancerous tumor. He stated a few months later about the experience: "It was really a quick thing. I mean, it doesn't compare to people that really have it and really fought it. For me, I was lucky. It didn't spread, it didn't get worse. They cut it out and that's it. But, yeah, it happens. Shit happens."

Thal left GUNS N' ROSES in 2014, but didn't publicly address his exit until earlier this year when he told Loudwire: "All I could say is you reach a time when you just know it's time to move on and you just know that what you've seen for your life, what you see the future of your life and what that is, it's not what you pictured for yourself."

He continued: "When I started playing music, I was six years old, and when I thought about what I wanted and what my goals were, and what makes me alive inside making music, and I just… I was looking at what I was doing, and it didn't match up. And I just needed to… I needed to go."

The guitarist expressed frustration in 2013 with the lack of new music from GUNS, saying, "If something came out at this point, it would be very old material that is just being released now… We need to make an album of this band right now." The last new GUNS N' ROSES album, "Chinese Democracy", came out in 2008.