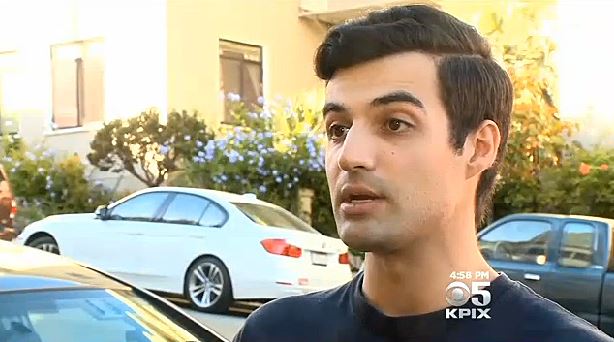 Former HATRIOT guitarist Andrew "Drew" Gage is being hailed as a hero after chasing away of a group of girls who attempted to rob a 67-year-old woman in San Francisco on November 5.

Writing on his Facebook page the day of the incident, Gage — who works for rideshare service Lyft — said: "Just had the craziest Lyft experience I've experienced since giving my first ride November 10th of last year. I saw a woman get robbed from inside my car, chased down the four hoodrats who robbed her, got inside their car, got her purse back, and got my foot ran over."

He continued: "I was parked on Union and Jones in front of a driveway waiting for a request. An older woman was walking up the hill on Union closely followed by four girls around 18-22, who were walking so close to her I actually thought they were all together. Five seconds later I heard screams, and looked to see the four girls sprinting down the hill holding her purse, while the woman ran after squirting blood on the sidewalk. I floored it, drove up to cut them off at the next block and they hopped around my car. I threw my wallet inside my car, got out with just my keys so I could run, and sprinted full speed after them. They got into their car and I held the rear passenger door open and got halfway inside. I grabbed one of the girls in the back by her sweatshirt, and yelled at the top of my lungs, 'GIVE ME THAT FUCKING BAG.' The driver yelled, 'I HAVE A GUN.' I looked around and saw one girl holding a pair of scissors and another holding a key, and yelled back, 'SHOW IT TO ME.' With one girl's sweatshirt in my left hand, I grabbed [the hood] of her sweatshirt and pulled back against the seat so she couldn't move. The car started moving, and they ran over my left foot. I yelled one more time, 'IS THIS WORTH IT? GIVE ME THE BAG!' I saw the bag in the driver's lap as she was trying to grab the lady's purse. I let go of shotgun, grabbed the purse before she could take the wallet out."

Gage added: "By this time, all of the neighbors had come out as well as a PG&E team working on the street, all got pictures of the girls and the car.

"Three of the girls bolted in opposite directions, one drove the car off, cops and ambulance came, and we found out the car was stolen. And found out Mary-Rae got the purse in London years ago, and that it was worth over $1,000. I hugged her, and she told me was going to use Lyft for the rest of her life."

A video report on the incident from KPIX can be seen below.

Image above courtesy of KPIX

Pictured below: HATRIOT circa 2011 (Andrew Gage is all the way right in photo)