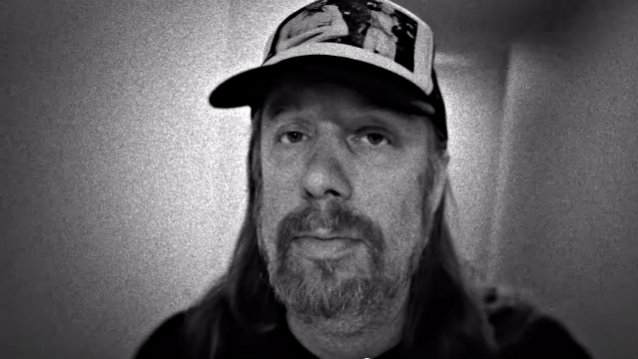 TOMAS LINDBERG On 'At War With Reality': We Wanted To Make 'The Ultimate AT THE GATES Record'

Vocalist Tomas Lindberg of seminal Swedish metallers AT THE GATES was interviewed on the October 24-26 edition of Full Metal Jackie's nationally syndicated radio show. You can now listen to the chat using the Podbean widget below.

Full Metal Jackie: We're here to talk about the brand new AT THE GATES album, "At War With Reality". Tomas, after the last several years, the two times AT THE GATES reformed to play live, you insisted there would be no new music. What changed your mind?

Tomas: "I would say the music changed our minds. [Laughs] We realized that statements are just statements, really, and if the world changes and we change, it would be untrue to ourselves and to the fans to hold onto the statement just for the sake of it. The music that Anders [Björler, guitar] presented was too good to not start to work on, really."

Full Metal Jackie: Once you knew AT THE GATES would record again, what led to "At War With Reality" being conceptual?

Tomas: "Well, I guess the start of the writing process was a little bit scary when we tried out the direction, but as soon as things started to come together… I [wanted] this [to] be the ultimate AT THE GATES record, so to say, and it proved to be just that, musically. But lyrically, it was so hard to grasp everything within one concept, so I just, what would take the listener by surprise? What would really challenge them as a comeback record? No one has really done a concept record as a comeback record. And I thought this might be really intriguing for the fans and showing them that this is a real album. It's not just, like, 'the best of AT THE GATES riff collection,' it's actually a real album."

Full Metal Jackie: In terms of the new album, musically, what's changed most about this band over the 19 years since the last album, "Slaughter Of The Soul"?

Tomas: "Well, I would hate to use the word 'maturity,' because people tend to think that that means slowing down. For us, it doesn't mean that at all. For us, that maturity probably comes from looking back at our whole career and looking forward and just seeing what is AT THE GATES? What is the whole idea of the band. The last record before the breakup, 'Slaughter Of The Soul', was a full-on, 30-minute just one feeling, one emotion, which was aggression. Looking back on our earlier records, there was more melancholy, more darkness, more despair, and so we wanted to mix it all up and have a little bit of every emotion on this record. It's still very full-on and in your face, but it portrays a wider palette of emotions, I would say."

Full Metal Jackie: What did you miss most about recording with AT THE GATES?

Tomas: "We didn't really understand how it would feel until we were actually in the studio, but we were prepared — we went through a very long writing and rehearsal process for this record, so we were really prepared. But actually going into the same studio again, the whole creative vibe was almost like a 'high' — it was very intense and very inspiring; a very, very positive atmosphere for the whole recording. And I would say that creative flow was something that I had missed a lot. We feed off each other in that environment."

Full Metal Jackie: Tomas, after so many years, what made it easy to come together in the studio again?

Tomas: "I would say all years leading up to this, all the touring during the reunion years. I mean, if you look at it, we've been together as long as the reunited band as we were back in the original days. So we actually played more shows live now, so we know what parts of what songs make Adrian [Erlandsson] tick as a drummer, we know which parts… how to write a really good thrash riff that both guitarists can feed off that energy. We know how we work as a unit much more that we did in the early days. So that, actually, [gives us] a sense of security, which also leads to a sense that we can actually try out more stuff, because there is grounded security in the band, therefore we can improvise more."

Full Metal Jackie: It sounds like there is going to be some touring in the U.S. for 2015. Are you looking forward to getting back here and touring for the U.S. audience?

Tomas: "Definitely. I mean, the U.S. tour we did back in 2008 was a very rewarding experience. We got so close to a lot of fans. And we never really toured the U.S. as a headline act before. And now we tour the U.S. again, and we come back with a new album. It's the first time we play live in the U.S. with a new album since 1996. So it's a very, very interesting scene, actually."