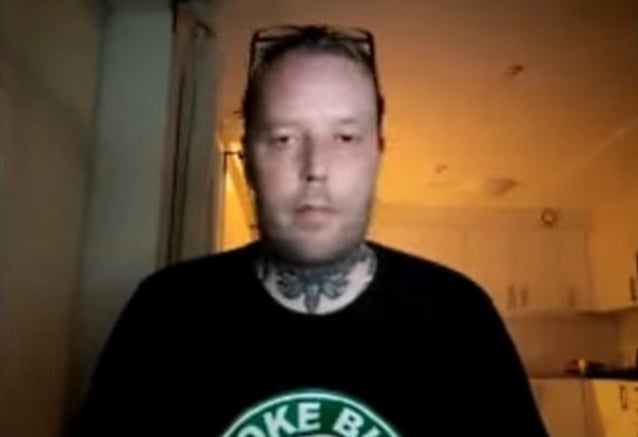 Ex-IN FLAMES Guitarist JESPER STRÖMBLAD Opens Up About His Addiction: 'Being A Drunk In Denial, That's Like A Full-Time Job'

Ex-IN FLAMES guitarist Jesper Strömblad, who has been sitting out THE HALO EFFECT's recent live shows in order to deal with his addiction and other demons, opened up about his ordeal in a brand new interview with A&P Reacts. Speaking about the fact that his THE HALO EFFECT bandmates have been supportive in his journey, going so far as to hire THE HAUNTED's Patrik Jensen to fill in for him at any gigs he is unable to play, Jesper said (as transcribed by BLABBERMOUTH.NET): "They have my back. They know that if we do some media stuff and I say that I have to bail because a panic attack is coming or something like that, they are, like, 'Yeah. Just go. We cover for you.' I have that net of people backing me up this time. So I'm gonna be on my feet and I'm gonna be on my full potential sooner than later.

"I got so much love," he continued. "I was so relieved to read the comments. It's not, like, 'Oh, not again. You never learn.' It was all just love. And that helps me a lot. And also that I have such a great support from the band and everyone involved with the band, that makes me also even more motivated to get well.

"I developed some kind of depression. I want to do stuff, but I'm not able to do that. It sounds weird, I know, but that's how the disease manifests itself. So I can never say, 'Oh, we have a show in two weeks. Okay, I'm gonna be there.' Maybe that day I'll have a good day, but I can never guarantee that from day to day. So that's what I have to adjust; I have to rewire. And there is some work left to do. But I have good doctors with me that help me out."

Regarding how he is going about dealing with his addiction differently this time around, Jesper said: "I've always been saying yes to everything, basically — like years ago, 'We're gonna do that thing. We're gonna do that show. We're gonna do that.' Okay, well, yes. And then I've been drinking to handle it. This is just an example. But now I'm just listening to my body, and if it says, 'No, but you shouldn't do this,' then I'm not doing it. And everyone is cool with it. And that feels so, so great, to have that support from the band. … And it's also very motivating for me to get well and come back on stage. I wanna be on stage rocking on stage. I'm so frustrated that I can't, but I have to listen to my body. There is a plan worked out, and if I just have discipline that I lack — I have to find it somewhere. But I am very optimistic. I am.

"Logically, I'm very happy — I know what is going on — but I cannot feel it," Jesper admitted. "It's weird and it's frustrating. And if you haven't experienced it, it's really hard to try to imagine [what I am talking about]. 'Hey, it's not that bad. Chin up.' If it was that easy, I would. But that's not the case. I have more good days than bad days; it's getting, like, more good days than bad days.

Strömblad went on to say that he is committed to getting better and conquering his demons once and for all.

"I have really good help. But it takes time," he said. "I would say that it's kind of post-traumatic stress that I have to go through and I have to deal with, that I always pushed ahead for the sake of the band or for the sake of a relationship or whatever. But now I have to think about myself a hundred percent. Because it's better that I sit out the tour and I come back and I am a hundred percent instead of me being always so-so. I'm kind of tired to be so-so. I wanna be on my full potential again. And I'm on my way — I am. I can feel it.

"The addiction, it led me to the depression, and that's a disease," he added. "And that's nothing to be ashamed of. That can happen to anyone at any point. And if I tell my story and I'm just honest with it, maybe it can inspire one guy to take that step and say that, 'Well, maybe I get the insight that I have a problem with alcohol' or 'I have a problem with drugs.' Because being a drunk in denial, that's like a full-time job, I tell you that… And I'm so tired of it."

THE HALO EFFECT released its debut album, "Days Of The Lost", on August 12 via Nuclear Blast Records.

THE HALO EFFECT made its live debut on June 11 at the Sweden Rock Festival in Sölvesborg, Sweden. The show marked the first time in over a decade that Strömblad played with his former IN FLAMES bandmates.