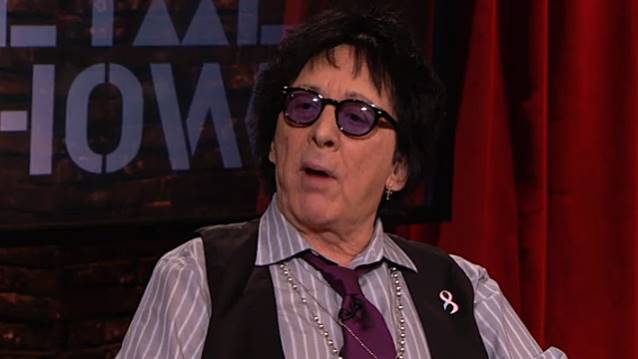 Original KISS drummer Peter Criss has shot down as bogus claims by the band's frontman Paul Stanley that Criss is a raging anti-Semite.

Criss, 68, told TMZ.com that he supports all religions and that his favorite aunt was Jewish.

Stanley — who, like fellow KISS co-founder Gene Simmons, is Jewish — has accused his former bandmates of hating Jews.

"[Original KISS guitarist] Ace [Frehley] and particularly Peter felt powerless and impotent when faced with the tireless focus, drive and ambition of me and Gene," Stanley writes in his new book, "Face The Music: A Life Exposed". "As a result, the two of them tried to sabotage the band — which, as they saw it, was unfairly manipulated by money-grubbing Jews."

Criss told TMZ.com he spoke to a lawyer but has no plans to take legal action against Stanley.

Speaking to VH1 Radio Network's Dave Basner on Monday (April 7),Frehley stated about Stanley's latest claims: "We say good things about each other and we say bad things about each other [in our memoirs], but it is what it is. It's rock and roll. I mean, if all we did was pat each other on the back for every book, people would say, 'That's a boring book.' They want to hear the dirt. I've got plenty of dirt."

Frehley, who himself released an autobiography called "No Regrets" in 2011, is working on a follow-up book and spoke to VH1 Radio Network about whether he plans on responding in it to all the latest claims by Gene Simmons and Paul.

"I've been working on my second book since once I finished 'No Regrets'; I already started writing stories for the next one," he said. "I mean, I could write five books on my life, it's that interesting."

He continued: "I don't want to go tit for tat, because that's not what I'm about. I like to lay it out and just tell it like it is, you know. If my memory isn't as good as somebody else's, so be it."