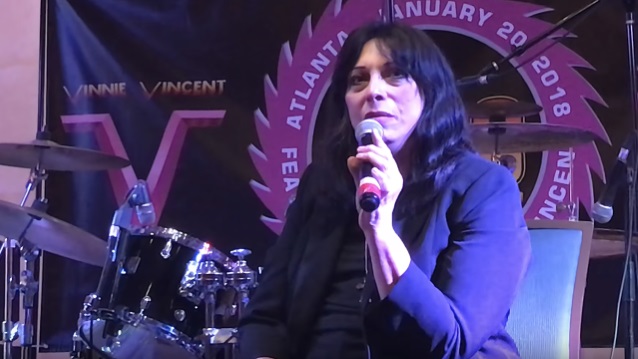 Ex-KISS Guitarist VINNIE VINCENT: 'I Was In Hell For 20 Years'

Former KISS guitarist Vinnie Vincent took part in another question-and-answer session on Saturday (January 20) at the Atlanta Kiss Expo. You can now watch video footage of the discussion in two parts below (courtesy of Mike Brunn).

Asked what led to his departure from KISS after the "Lick It Up" touring cycle came to an end, Vincent said: "The problem was really simple. I was writing a lot of songs, and I felt us growing so much as a band, and I wanted them to want me. I know they wanted Eric [Carr, drums] — they loved Eric — but I didn't feel that they wanted me. Even after 'Lick It Up', the perception of it was that it was a big album, and I still felt, 'No matter what I do, they're just not gonna want me in this band.' And there was a contract they wanted me to sign. But I was bringing… My take-home pay was 550 dollars a week, so I never made any money being in the band. From the beginning to the end, it was 550 dollars a week; that's what they paid me. That was my take-home after taxes."

According to Vinnie, he was only asking for a bare minimum so that he could support himself and his family. "This was my dream to be in this band," he said. "I didn't want anything as much as I wanted this. Maybe just a little bit so I can buy a house or something. Maybe I could buy a nice car. But that wasn't gonna happen. And there was a contract that they wanted me to sign — it was an employment contract — and there was literally nothing in it for me. I had a family. I had twins that I didn't know I was gonna have, and there was no money to take care of them, and there was no money to buy a home. We were living with relatives, and I was on call 24 hours a day, which was okay — it was all okay. But I couldn't move on; there was no future. There was the future of being Vinnie Vincent of KISS and what that was, but, financially, there was no future in it for me. And I didn't want to be a royalty member, although that would have been nice. But that's not what I asked for. I just asked for something that could take me out of living in an apartment or with my relatives, and maybe a nice car instead of driving around in a car the size of a can of tuna. And while I'm on the road, I've got a family, I've got little children. I wanted to know that they were well taken care of and at least that some of my value, my worth to them would have been special to them and said, 'Look, we can afford to make this work for you,' and they just didn't."

Vincent said that everything came to a head at the end of "Lick It Up" tour when "the pressure" on him "was so, so, so unbearable to sign" the contract which was presented to him, which he described as "all for us and none for Vinnie. I said, 'I can't, I can't, I can't. Just please treat me better than this and everything will be fine,'" he recalled. "There was nothing. I never saw any royalties during the time I was in the band; it was just a paycheck, that I took home 550 bucks a week. So after the 'Lick It Up' tour was a success and I'm thinking, 'We have a great band. This is a new chapter. This is now…' The makeup came off. This was probably for Gene [Simmons] and Paul [Stanley] a really difficult time, because the makeup was what the band was. To remove it, I think, was a bit of a relief. This is my opinion — it was a bit of a relief, but [there was also] a bit of fear, trepidation, because you didn't know what was coming. But 'Lick It Up' said, even with Vinnie, this worked. The songs were great, the reception was great, the tours were great. And at the end of the 'Lick It Up' tour, I remember… The last thing we said to each other was, 'We're gonna record a new record. Come back in about two months with your new songs.' Everybody said, 'Well, see you then. We're all gonna record our new songs, demo them, bring them together and see what we've got for the new record.' I recorded and demoed [future VINNIE VINCENT INVASION songs] 'Boyz Are Gonna Rock', 'Shoot U Full Of Love', 'No Substitute', 'Animal' and 'Twisted'. Those were the five songs that I wrote that I was gonna bring back. They were demoed, and I said, 'This is gonna be one hell of a KISS record, and I think they're gonna love them.' So they asked me to come back, and I said, 'I wanna come back, but I've got to survive. I can't survive on this. And I'm coming back with a great album. Can't we make this work?' And, unfortunately, the answer was no. 'Unless you sign the contract, you can't come back.' And I said, 'You know what? This is gonna break my heart. I can't come back.' So then, about a month later, in May of '84, they sent me a letter saying, 'Well, you're fired.' I guess it was redundant because I already said I wasn't coming back if you can't make this work. And that's what happened. And it broke my heart."

Vincent also talked about his "20-year-lawsuit" against his former bandmates, alleging unpaid songwriting royalties. He said: "It could have all been avoided. It was senseless, because there were millions of dollars in warranties. And I tried for four fucking years — from '91 to '97 — to say, 'Can't we just work something out?' This wasn't something I wanted to do; this was the last thing I wanted to do. But right is right, and I'm willing to… Just show me some humanity, just a little compassion. Maybe just help me out — settle with me. Just something to make all of this just have been worth it for me. And they said 'no.' And they hurt me deeply — deeply, deeply, deeply, fucking deeply — and there was nowhere to go but to file this lawsuit.

"The miracle that I survived that lawsuit was probably as miraculous as surviving what happened to me in 1984," he added. "And I just put it behind me. We eventually settled everything that we had between us, all the problems, about seven years ago. But I was in hell for 20 years, and it was my hell — nobody knew it. And I saw the world going by, I saw what everybody was saying about me, I saw what everybody in the band was saying about me, and I said, 'What a shame. What a shame.' There was no reason for it. I mean, we could have had — in my opinion — such a fucking great band. We still can, we still can, because that magic never ends. I still love them. I mean, it's never gonna go away. So when you respect — and I do dearly respect Gene and Paul with all my heart; I love them and I always will. They gave me this. With the good came the bad. But the magic that we have together never dies."

Vincent said that he had a fond recollection of his last collaboration with KISS, which happened when he was brought in to co-write "Unholy", "Heart Of Chrome" and "I Just Wanna" for the band's 1992 album, "Revenge". "I didn't see them from '84 to '91," he said. "'91 was our first meeting again after VINNIE VINCENT INVASION. And Gene said, 'We're recording a new record.' I think I saw Gene in a recording studio. 'Give us a call. Let's work together.' And I said, 'Ah, I'd love to see you.' And then 'Revenge' happened and those songs. And I said, 'This is the moment. This is the band. This is it.' 'Unholy' was Gene and I; that was our baby. Paul and I wrote two songs, and we worked together for a year on that record. And it was another fun time. I mean, every time we worked together, it was just a joy. The magic, it's something that I can't put into words. 'Magic' is not the right word for it, because it's electric when you just… Something that happens when you plug in something and there's electricity here and it just works. So it turned out to be a great record and a lot of music that I'm proud of."

Vinnie Vincent joined KISS in 1982, replacing Ace Frehley. As the "Ankh Warrior," he toured with the group in support of "Creatures Of The Night", on which he played lead guitar on six songs prior to becoming an official member of the band. From there, KISS wrote and released "Lick It Up" — their first album without makeup — in 1983, a recording on which Vincent co-wrote eight of 10 songs, including the title track, which remains a staple of the group's live performances to this day.