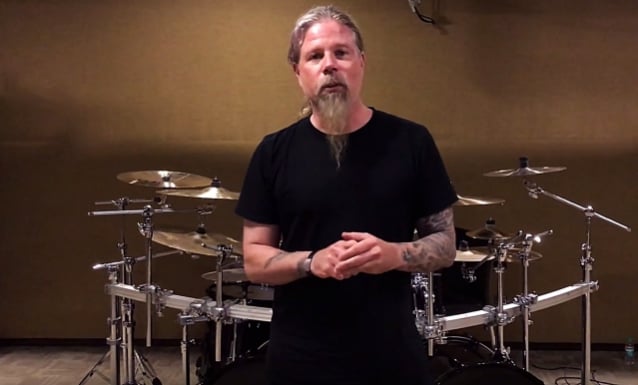 Ex-LAMB OF GOD Drummer CHRIS ADLER: 'It's Exciting For Me To Be Able To Stay Passionate In The Music Industry'

Former LAMB OF GOD drummer Chris Adler spoke to The Hindu about his management agency, Kintsugi Management. Less than a year old, the company, which Adler launched with music industry executive Jason Lekberg, currently works with two bands: BETRAYING THE MARTYRS from France and DYSCARNATE from the U.K.

"It's exciting for me to be able to stay passionate in the music industry without having to be on the road for eight or 10 months a year," Chris said. "It has given me a chance to get in touch with bands that I really like, and hopefully help them avoid some of the problems in the music industry that I have seen." For instance, he observed, "The typical record label deal is just absolutely terrible; merchandise deals are terrible; it's very hard to stand out in a crowd of a million other bands."

According to Adler, the managent company is not limited to representing metal acts. "[I am] open to anything," he said. "But I seem to have a reputation in heavy metal, and I really still love heavy metal, so that goes a long way and is probably a good place for me to start. And as the music picks up, there's no limit to it."

Earlier this month, Adler returned to India to conduct a series of drum and music-business clinics and live shows titled "The Chris Adler Experience", presented by Gravity Talent. The live shows are seeing Adler supported by a number of the country's top musicians belting out the best-known LAMB OF GOD and MEGADETH material.