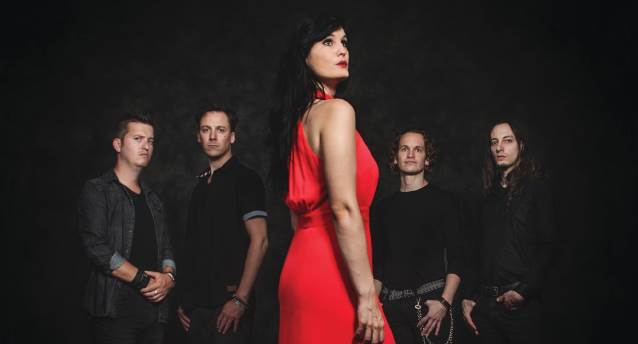 On August 1, Dutch progressive metal formation EX LIBRIS — which features in its ranks former XANDRIA vocalist Dianne Van Giersbergen — will release the unique triptych "Ann", in which three historic women from different era are the central focus. In the first chapter, the band will take you on a musical journey through the tragic life of Anne Boleyn, Queen of England. Through the crowdfunding campaign, the fans can follow the developments around the other two chapters and actively support the band in her efforts.

"Chapter 1: Anne Boleyn", which contains almost 20 minutes of music, will be made available on August 1. The record, that can be characterized as a wide variety of vocal colors and strong melodies, is supported by the extraordinary artwork of 2D artist and illustrator Jelle Steenhuisen. "Ann" is helmed by Dutch producer Joost Van Den Broek at Sandlane Recording Facilities. Van Den Broek is a well known name in the progressive and symphonic metal genre who has worked with big bands like AFTER FOREVER (former band of Floor Jansen from NIGHTWISH),EPICA, AYREON, and many others.

A first taste of "Ann" can be found below.

The release of the next two chapters of "Ann", which will complete the trilogy, is scheduled for 2019. During the course of this year, it will be announced which other two historic women are the central focus of these records.

Dianne quit XANDRIA last September, explaining in a statement that she was exiting because "staying in the band would cause further damage to the health problems the band has caused me." She went on to say that her attempts "to put band and management issues on the table… failed and have been ignored" and her "cries for help have been met with financial threats and emotional extortion," ultimately leaving her with "uncontrollable stress symptoms."