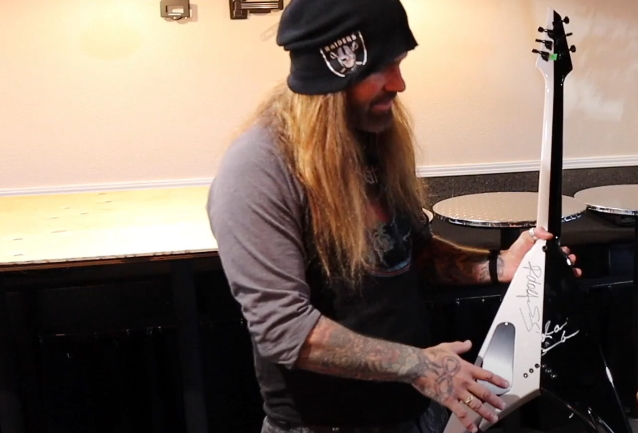 Ex-MACHINE HEAD Guitarist PHIL DEMMEL: How I Got MICHAEL And RUDOLF SCHENKER To Sign My Guitar

During a recent interview with Music & Medicine, former MACHINE HEAD and current VIO-LENCE guitarist spoke about how he got two of his guitar heroes, Rudolf and Michael Schenker, to sign one of his flying V guitars from Jackson. He said (as transcribed by BLABBERMOUTH.NET): "Michael Schenker played in UFO. He played in the SCORPIONS when he was 15 years old. Just a prodigy — just a natural guitar player. [He's] a little crazy. I would think he'd admit that. But I love his style; you understand what he's feeling.

"MACHINE HEAD is playing Wacken [Open Air] festival in Germany, so it's 80 thousand people. It's crazy. SCORPIONS are playing. They're actually playing before MACHINE HEAD. So I met Rudolf Schenker, who is in the SCORPIONS; he played the same guitar. [That's Michael's] brother. His son is a big MACHINE HEAD fan. We bumped into him at a METALLICA show, and I got drunk with Rudy and his kid. So I got Rudy to sign it. This is Rudolf. So I get Rudolf to sign it. And then Michael Schenker is coming to town. And I know the local promoter. So I go down. [I tell the promoter] 'Hey, I've got this guitar. Can I come down to soundcheck and maybe have Michael sign it?' [And he said], 'Yeah, bring it down. Here's the tour manager's name.' So [the tour manager] gives me a call. And he's all, 'Yeah. Come on down. He'll sign it.' He's all, 'Well, what if I ask him if you can just play [UFO's] 'Doctor Doctor' with him? You just get up and play.' So I'm all, 'Don't fuck with me, man. Don't set me up and then say this isn't gonna happen. Don't fucking take this away.' So he talks to Michael. [Michael said], 'Yeah, have him come up.' And like I said, Michael's a little crazy. I was waiting the whole day for something just to [happen]. Like the amp wasn't working at soundcheck. And I'm, like, 'All right. Here we go. He's gonna pull the plug on it.' But he didn't. I went up and I played the song with an absolute legend. So, as we're playing, he's jamming, I'm jamming, and at the end of the song, I take the guitar over. I have a Sharpie ready, and I hand it to him. And he's just ripping over here and he's signing my guitar on the other side. So I bow."

Demmel added: "It's probably my rock and roll moment, as a fan, to have [Michael] sign this."

Demmel spent most of 2019 and early 2020 playing sporadic shows with the reunited VIO-LENCE, which recently inked a deal with Metal Blade Records. The band's new EP — featuring the first all-new VIO-LENCE music in more than three decades — was recently recorded for a tentative early 2022 release.