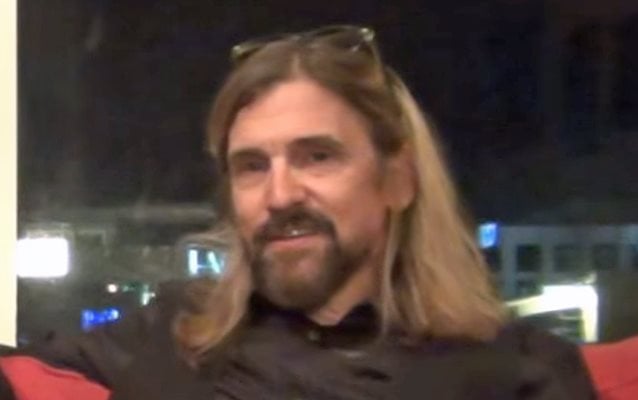 Bassist James LoMenzo, who has played with MEGADETH, BLACK LABEL SOCIETY and WHITE LION, was interviewed by Argentinean rock journalist Lucas H. Gordon at a recent installment of the "Ultimate Jam Night", the long-running weekly free music show held at the famed Whisky A Go Go in West Hollywood, California. You can now watch the chat below.

Asked what projects he is involved with at the moment, LoMenzo said: "Right now, I play with, of all people — this may seem interesting or shocking, depending on what you like to listen to — I play with John Fogerty [former member of the popular 1960s rock band CREEDENCE CLEARWATER REVIVAL]. And that's why I came here with [legendary drummer] Kenny Aronoff. We play together. Kenny Aronoff was kind enough to suggest to John that I might be a good fit for the band, and three years later, I think Kenny was probably right. So that's most of what I do now. I do a lot of sessions in town. Kenny and I do sessions together and apart. I have a production company called Monster House Productions, where we do all kinds of projects. We started out doing commercial projects for companies like Manley and Aphex and Ashdown. We make video tutorials for their equipment and stuff like that that you see on YouTube and online. And that's just spurned out of a passion that I had. I love gear and I love videography and I love photography, so that put it all together for me. So I just started this company just to fill my time when I wasn't out touring."

LoMenzo also talked about how important it is for musicians like him to constantly stretch their creative muscles in order to stay inspired.

"I can't get enough of anything," he said. "To me, if it's creative, I really enjoy doing it, and I try to stay as creative as I possibly can.

"A lot of times, when I give lessons to students, they come in, they get a little stuck," he continued. "We go over the stuff over and over, and they go, 'I don't know where to go with this.' And [I say], 'I'll tell you exactly where to go with it. Put your guitar down. Put your bass down. Go to a museum. Do you like paintings?' 'No' 'Do you like movies?' 'Yeah, I love movies.' 'Go see a movie, dude. Do you like the park? Go sit in a park. Do anything — anything that gets you to think in a different way than just focusing on the same thing.

"Some people love to just kind of hit the fretboard as hard as they can and get as good as they can, but the truth of the matter is you can only progress so far until you start seeing things in a different way. And once you can do that, you can progress… With all the stuff you've worked on, you can actually move it in a different direction. So that's something that I live by, and I try to share that with other people. And for some people, it's great. Other people don't need it. I kind of need that."