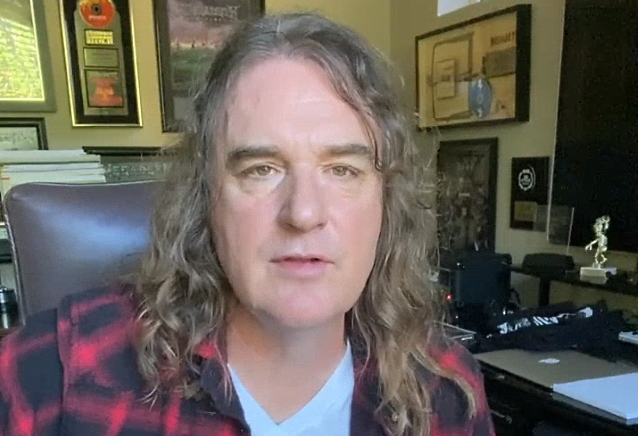 Ex-MEGADETH Bassist DAVID ELLEFSON: 'Every Gig Is An Audition For The Next Gig'

During an appearance on Rock Dance Theatre TV's November 11 YouTube livestream, former MEGADETH bassist David Ellefson discussed how he chooses which projects to get involved with when the opportunities are presented to him. He said (as transcribed by BLABBERMOUTH.NET): "Every time I made a music thing about money, there was never enough money and I certainly never liked the music. [Laughs] If you enjoy the music, if you enjoy the creative process, maybe there's not a lot of money in it, but I really don't care 'cause I'm really digging the hang. So I've learned… The bills somehow have always been paid. And it's just say yes, suit up, show up, get in a room, bring your bass, be in tune, be on time, look your best, play your best, be your best and walk in with your best attitude. Every gig is an audition for the next gig. So how you handle coming into a gig is important, and sometimes how you handle leaving a gig. 'Cause all things don't last forever, so how you depart or if there's a falling out and it doesn't work… I remember [legendary drummer] Vinny Appice saying that, 'cause he was talking about, I think, BLACK SABBATH and stuff. He said, he goes, 'You know, some people just fight their way out the door rather than just accepting, eh, that was then, and it's over.' In fact, even my friend Drew [Fortier], who's the guitar player in THE LUCID, we were talking about some stuff, and it's sort of, like, don't be sad it's over. Be glad it ever even happened. Sometimes when you look at that, it's, like, 'Yeah, that was pretty cool.' Whatever it is — whether it's a relationship, a band, a book. Be glad it even happened, man, and enjoy what was there and move on to the next one. There's gonna be more."

In 2004, Ellefson filed an $18.5-million lawsuit against MEGADETH leader Dave Mustaine, alleging the frontman shortchanged him on profits and backed out of a deal to turn Megadeth Inc. over to him when the band broke up in 2002. The lawsuit was eventually dismissed and Ellefson rejoined MEGADETH in 2010.