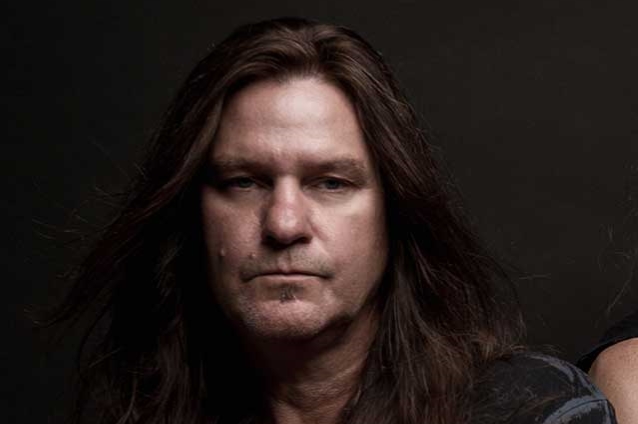 Ex-MEGADETH Drummer SHAWN DROVER On SLAYER's Decision To Call It Quits: 'Somebody In The Band Doesn't Wanna Tour Anymore'

Former MEGADETH and current ACT OF DEFIANCE drummer Shawn Drover spoke to Heavy Metal And Booze about SLAYER's decision to call it quits after completing one last world tour. He said (see video below): "Well, it's obviously something that they want to do. And it's all speculative, what you read on the Internet, which most of what I read on the Internet is full of shit anyway, so you have take that with a grain of salt. Obviously, somebody in the band doesn't wanna tour anymore, and that's fine. Look, Tom Araya [SLAYER frontman] has a wife and kids, and they've been doing it for 36, 37 years. The first record came out, I think, in '83 — I think 'Show No Mercy' came out in '83. So as a band with a record out, they've been touring for 35, 36 years now. So… it's a long time."

Drover announced his exit from MEGADETH in November 2014 to "to pursue [his] own musical interests." A few hours later, guitarist Chris Broderick revealed he was also quitting the legendary metal band, saying that he was leaving the group "due to artistic and musical differences."

Drover and Broderick are joined in ACT OF DEFIANCE by ex-SCAR THE MARTYR singer Henry Derek Bonner and SHADOWS FALL's Matt Bachand (bass),

ACT OF DEFIANCE's sophomore album, "Old Scars, New Wounds", was released last September via Metal Blade Records. The follow-up to 2015's "Birth And The Burial" was mixed by Dave Otero, who has previously worked with CEPHALIC CARNAGE and CATTLE DECAPITATION, among others. The cover artwork was created by Travis Smith (KING DIAMOND, OPETH, AVENGED SEVENFOLD, STRAPPING YOUNG LAD).