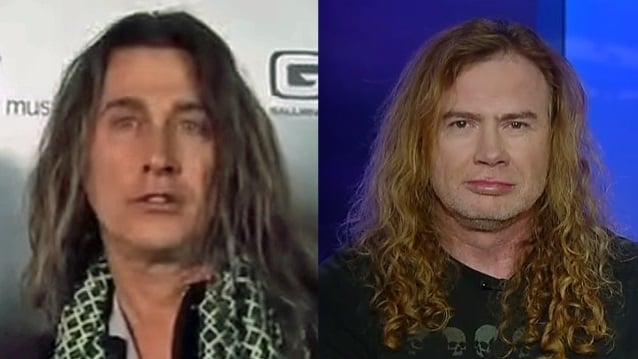 Jeff Young has shared a letter he claims he received from Dave Mustaine less than two months ago in which the MEGADETH leader purportedly apologized to his former bandmate for "disclosing [their] secrets" and invited him to take part in the group's hypothetical Rock And Roll Hall Of Fame induction.

The guitarist, whose entire career with MEGADETH was spent recording and touring in support of the band's 1988 platinum-selling album "So Far, So Good...So What!", revealed the contents of the letter during the latest episode of his "Music Without Boundaries" Internet radio show.

Claiming that the letter was forwarded to him on November 27, 2017 via MEGADETH's longtime webmaster Dave McRobb, Jeff read out its contents to his listeners (hear audio below),occasionally peppering it with small personal asides.

According to Jeff, Mustaine's letter read as follows:

"I know our relationship has been good and bad, and good and bad again, and I want to say I'm sorry and I'd like to make things right. I have something else very serious to bring up now too, okay? We are being considered for the induction into the Rock And Roll Hall Of Fame in the next year or two and I really, really want you to be there with me when we do.

"I understand if you cannot forgive me, and that is something else I wanted to discuss with you. I'd rather do it in person. In the event I can't see you soon and the induction happens before, we can meet. I need to apologize to you for disclosing our secrets after we broke up.

"Jeff, I know you know I was hurt, and honestly, I know us breaking up hurt you too, although I'm sure it was a relief in some ways for you too. I was afraid we couldn't find someone as talented as you. I honestly missed our good times. I was also very intimidated by your incredible guitar skills.

"I'm sorry if I remember things differently. I truly thought what I said was correct and maybe Dave [Ellefson, MEGADETH bassist] and Chuck [Behler, former MEGADETH drummer] could help remind us of what happened.

"I never meant to hurt you or your career, and I have tried to make up for it with positive comments, since I upset [sic].

"I know it doesn't matter as much as my apology does in making amends for whatever I've done that I'm not aware of.

"I also have a radio show. I've been playing a lot of 'So Far, So Good… So What!' and I wondered if you had any stuff you'd like played.

"As soon as we know [about the Rock Hall induction], we're willing to confirm with the alumni and I'll make sure you get in and out quickly and safely back to Florida.

"Jeff, I was healed from METALLICA with loads of therapy. When they went into the Rock And Roll Hall Of Fame and didn't let me be a part, everyone knew Lars [Ulrich, METALLICA drummer] was behind that. I promised myself after that happened to make amends to my guys and for us to be together on that glorious day.

Young, who pointed out on his show that he hasn't lived in Florida for the past eight years, seemed unimpressed by Mustaine's gesture, saying that while "it's cool" that Dave wrote the letter, there was "so much that's been said" by Mustaine "about all the [former MEGADETH] members, not just me." Jeff then added that he doesn't "give a shit" about "the petty stuff," insisting that he has "moved on" from MEGADETH.

got a letter from Dave Mustaine couple weeks back... just been "sitting" with "the contents" ...was pondering...